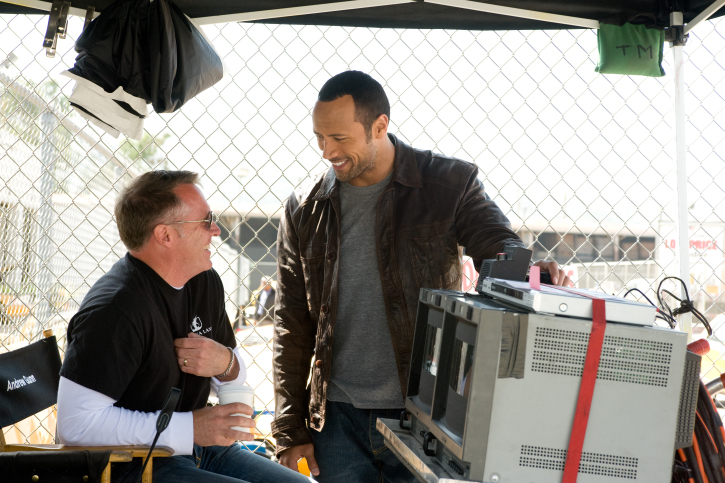 Weekend Report: ‘Witch’ Blasts Off, ‘Watchmen’ Burns Out
March 16, 2009 14:36 PDT - By Brandon Gray - Box Office News
Race to Witch Mountain rocketed to the top of the box office with $24.4 million on approximately 4,400 screens at 3,187 sites, while last weekend's big draw, Watchmen, shrank by two thirds. As a whole, overall attendance hit a 13-year low for the time of year. While Race was a solid attraction, the movies below it simply lacked the appeal or were too old to maintain 2009's prior record-breaking rate, and Race didn't have the magnitude of past high profile March releases to compensate.

While it wasn't as sizable as Dr. Seuss' Horton Hears a Who! last year, Race to Witch Mountain had a worthy showing, soaring above the norm among similar titles. Walt Disney Pictures' family-oriented adventure featuring Dwayne "Dwayne Johnson" Johnson edged out the debut of their previous Johnson vehicle, The Game Plan, which started at $23 million. Its opening also flew higher than Journey to the Center of the Earth, The Last Mimzy and Sky High among other comparable movies.

With advertising in heavy rotation that featured Dwayne Johnson's action comedy routine and a special effects shot of an SUV wrapping around one of the alien children, Race to Witch Mountain's audience composition was 56 percent 25-years-old and younger and 51 percent female, according to Disney's research. The studio also pointed out that while approximately two thirds of moviegoers were parents and their children, 18 percent were couples without children. Race is an instance of Disney dipping into the well of its back catalogue. The 1975 original, Escape to Witch Mountain, made $20 million in its day, or the equivalent of over $70 million adjusted for ticket price inflation, and its 1978 sequel, Return from Witch Mountain, earned $16.4 million, or more than $50 million adjusted.

Another remake of a 1970s movie, The Last House on the Left, extracted $14.1 million on around 2,800 screens at 2,401 locations. The opening for the Wes Craven redo was below par among horror remakes and less than another Craven revisit, The Hills Have Eyes. Among like-minded pictures, Last House landed between The Strangers and Vacancy. Last House's ads presented a revenge angle of parents killing the criminals who hurt their daughter, but the picture still had the appearance of just another gruesome horror movie. According to distributor Universal Pictures' exit polling, 57 percent of the audience was female, 60 percent was under 25 and the Hispanic turnout (36 percent) was slightly higher than the Caucasian (35 percent) among ethnicities.

Watchmen disintegrated 68 percent to $17.8 million for $85.8 million in ten days, trailing all previous superhero movies that debuted in the $50 million range through the same point. For perspective, 300, which Watchmen was oft compared to, fell 54 percent to $32.9 million in its second weekend (for a $129.2 million total), and, among major comic book movies, only Hellboy II: The Golden Army and Hulk had steeper drop-offs. The weekend further cemented Watchmen's status as a movie with much more limited appeal than other superhero pictures, rooted in its non-mainstream source material and its diffuse storyline and marketing. Watchmen's 124 IMAX theaters held a bit better than the rest. They were down 58 percent, accounting for an estimated $2.3 million of the weekend and $9.5 million of the total.

While overall business was down, it wasn't due to several aging but trusty holdovers. Taken had the smallest decrease among nationwide releases, off a mere ten percent to $6.6 million for $126.8 million in 45 days. The action thriller is the first picture since The Dark Knight to spend seven weeks in the Top Five, something that's occurred only 12 times in this decade.

Tyler Perry's Madea Goes to Jail receded 40 percent to $5.1 million, but it was the best fourth weekend hold a Tyler Perry movie has ever seen, and its total grew to $83.2 million in 24 days. Slumdog Millionaire faded 27 percent to $5 million, raising its tally to $132.6 million, while Paul Blart: Mall Cop was off 25 percent to $3.1 million and He's Just Not That Into You was down 27 percent to $2.9 million. Coraline continued to level off after losing most of its 3D theaters to Jonas Brothers: The 3D Concert Experience. Slowing 17 percent, the stop-motion animated feature conjured $2.7 million for $69.2 million in 38 days. Jonas Brothers, on the other hand, dropped 67 percent in its third weekend to a measly $940,270. Its decline was about the same as the Hannah Montana concert, but Hannah had made $58.4 million at this stage compared to Jonas' $18.2 million.

Also opening nationwide, Miss March was far from centerfold material, limping in with $2.4 million at 1,742 locations. The ribald comedy's start was even less than Sex Drive from last fall. In its limited debut, Sunshine Cleaning showed a glimmer of promise, soaking up $219,190 at four venues or $54,798 per site. The comedy is scheduled to expand to around 50 theaters on Mar. 20. On the other end of the spectrum, Crossing Over, a drama featuring Harrison Ford, collected $102,331 at 38 venues in its third weekend, averaging just $2,693 per site for a puny $272,175 total.

• 'Watchmen' Rages in the Top Spot

• All Time Consecutive Wekends in the Top Five