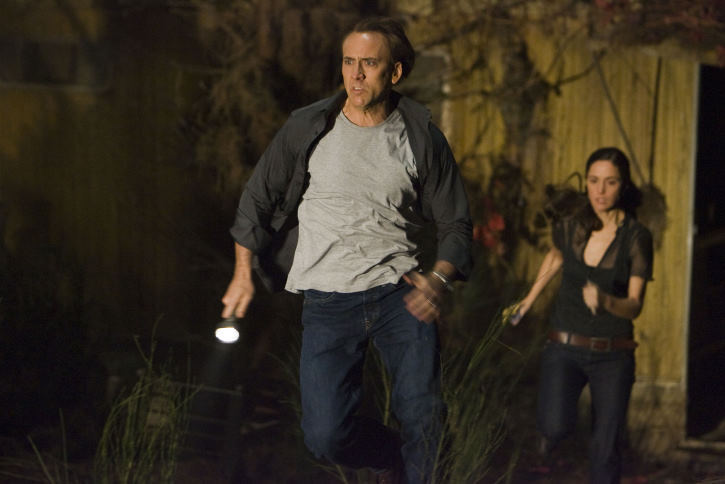 Weekend Report: ‘Knowing’ Digs Up the Digits
March 23, 2009 15:27 PDT - By Brandon Gray - Box Office News
Leading up to the weekend, the numbers pointed to a first-place showing for Knowing, given its genre, marketing push and the scope of its release, and that's what happened. The picture didn't need stellar grosses to top the weekend as March business has been lagging behind recent years. Overall weekend ticket sales were off seven percent from the same time last year, and attendance was the lowest in eight years.

Knowing unearthed a solid $24.6 million on approximately 4,300 screens at 3,332 sites, which was soft by disaster movie standards but more competitive among fantastical thrillers. It handily outdrew The Mothman Prophecies, Premonition and Next among past similar movies, and its initial attendance was a touch higher than The Forgotten. Distributor Summit Entertainment's advertising succinctly and eerily conveyed the premise of a man (Nicolas Cage) discovering a number code from a time capsule that predicts disasters. The Knowing campaign began in earnest when Summit attached the trailer to its event picture, Twilight, last November. According to Summit's exit polling, Knowing's audience was 63 percent 25 years and older and evenly split between the genders.

I Love You, Man befriended about as many moviegoers as Forgetting Sarah Marshall last spring and a bit fewer than Role Models among like-minded movies. The latest arrested development comedy, this time focusing on male-bonding, came in second with $17.8 million on around 3,400 screens at 2,711 theaters. That's more than adequate for a picture of this ilk, and it would be inappropriate to set the bar at more broadly appealing movies like Knocked Up and Step Brothers. Distributor Paramount Pictures' research indicated that the turn-out was roughly even between males and females and that the audience was 55 percent over 25.

In third, Duplicity picked up a relatively modest $14 million on approximately 2,900 screens at 2,574 locations. The romantic caper's opening was below average for its sub-genre and attendance was lower than Intolerable Cruelty and Matchstick Men among comparable titles. Duplicity marked Julia Roberts' first proper star vehicle since Mona Lisa Smile in 2003 after years of ensemble or supporting work. While tonally Duplicity's marketing struck a chord like Ocean's Eleven, ads relied heavily on the interplay between Roberts and co-star Clive Owen above all else. Distributor Universal Pictures' exit polling suggested that 61 percent of the audience was female and 78 percent was 30 years and older.

Race to Witch Mountain slowed a sizable 48 percent to $12.8 million, ranking fourth for the weekend. By comparison, Walt Disney Pictures' previous Dwayne "Dwayne Johnson" Johnson family movie, The Game Plan, fell 28 percent in its second weekend. Witch Mountain's $44.5 million ten-day tally, though, is a tad higher than Game Plan's ten-day mark due to many kids being off school during the week for spring and semester break.

Rounding out the Top Five, Watchmen saw its audience evaporate again, failing to level off in its third weekend. The superhero drama generated $6.8 million, bringing its total to $98.1 million in 17 days. Its 62 percent drop was a new low among major comic book adaptations. It did lose about a third of its screens, from around 7,100 last weekend to 4,700 this weekend, but the screen count was still much higher than the audience demand. Watchmen is poised to barely double its $55.2 million opening weekend by the end of its run.

The Last House on the Left plunged 59 percent in its second weekend, which was in line with The Strangers and The Hills Have Eyes 2 among other horror movies, and grossed $5.9 million for $23.9 million in ten days. Taken made $4.1 million, down 38 percent for an excellent $133.1 million in 52 days. Slumdog Millionaire had its steepest fall yet, tumbling 46 percent to $2.7 million, and its total stands at $137.2 million.

Among nationwide releases, Coraline dipped the least, easing 22 percent to $2.1 million for a $72.8 million total in 45 days. Sunshine Cleaning leapt from four venues last weekend to 64 this weekend, yielding $671,618. As is the norm for platform releases, the gross increase was not commensurate with the theater count jump, but it was decent nonetheless. Sunshine Cleaning is scheduled for over 250 theaters on Mar. 27.