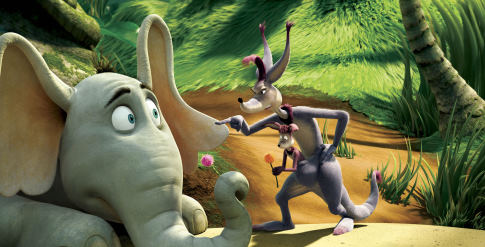 'Horton' Hatches Easter Win
March 24, 2008 11:55 PDT - By Brandon Gray - Box Office News
With a colorful cartoon leading again, it was a relatively quiet Easter weekend. Tyler Perry garnered another good opening, but little was heard from the other new movies.

Dr. Seuss' Horton Hears a Who! tumbled 44 percent to an estimated $25.1 million. The second weekend drop was steeper than the ones for Ice Age, Robots and other similar computer-animated features but smaller than Ice Age: The Meltdown. Horton's ten-day tally of $86.5 million is higher than The Cat in the Hat through the same point though much lower than How the Grinch Stole Christmas.

Tyler Perry's Meet the Browns gathered an estimated $20 million on approximately 2,700 screens at 2,006 theaters, ranking in the top ten of most attended Easter debuts. While the start was lower than Perry's Madea movies and his last picture, Why Did I Get Married, it was much higher than Daddy's Little Girls, it's closest fit in subject matter. In the trailer, Meet the Browns was sold more as a family drama and romance featuring Angela Bassett than as a comedy, aside from a non sequitur appearance by Madea at the end.

The weekend's highest profile nationwide opener, Drillbit Taylor, mustered an estimated $10.2 million on around 3,400 screens at 3,056 sites. The comedy, the first picture actor Owen Wilson has carried as the sole billed star, had a mixed marketing campaign that tried to appeal to kids with its slapstick bully plot and adults with its Knocked Up and Superbad references and Wilson's sensibility, and the result was between Mr. Woodcock and the Bad News Bears remake.

Also opening, Asian horror remake Shutter snapped an estimated $10.7 million at 2,753 venues, which was mediocre for the genre and in the same range as Stay Alive from two years ago. In limited release, Under the Same Moon made a decent estimated $2.6 million at 266 locations.

Though depositing a modest sum, The Bank Job, again saw the slimmest decline among wide releases. Down 19 percent, the caper scored an estimated $4.1 million for $19.4 million in 17 days. Also holding respectably were Vantage Point, The Other Boleyn Girl and Miss Pettigrew Lives for a Day, while 10,000 B.C. and Never Back Down had typical falls for action movies.