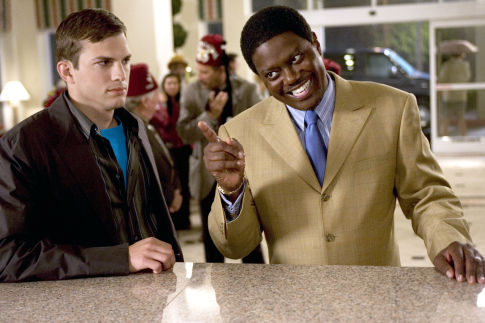 Guess Who, a looser, lighter remake of the 1967 dramatic comedy Guess Who's Coming to Dinner? starring Bernie Mac and Ashton Kutcher, courted $20.7 million at 3,147 theaters. Riding young and broad demographic appeal to the top spot—beating industry tracking projections of around $15 million—distributor Sony's exit polling showed that 59 percent of moviegoers were under the age of 25, 54 percent were female, and 55 percent were non-white.

Reminiscent of Meet the Parents in its marketing, Guess Who reversed the set-up of Guess Who's Coming to Dinner? with Kutcher as the white man meeting his black fiancee's disapproving father (Mac). Culture clash is a proven comedy formula—the similarly-themed Bringing Down the House found even greater success two years ago—and, with a domestic setting, often garners a wide audience, such as with Meet the Fockers and, currently, The Pacifier. Guess Who's effective trailer summed up the essence of its comedy with Mac and Kutcher reacting to the songs "Walk on the Wild Side" and "Ebony and Ivory" from a car radio, a shot and joke evoking the same scene of Jackie Chan and Chris Tucker in Rush Hour.

Guess Who marks the first hit for Mac (Fox's The Bernie Mac Show) as a headlining star, following the disappointment of last fall's Mr. 3000. It's also the biggest opening yet in a leading role for Kutcher (Fox's That '70s Show), who's becoming a reliable draw after previous mid-range successes like Just Married and The Butterfly Effect. He'll soon be seen again in Buena Vista's romantic comedy A Lot Like Love on April 22.

The industry's favorite to top the weekend, based on tracking and the success of its predecessor, was relegated to a second place finish. Miss Congeniality 2: Armed and Fabulous collared $14.0 million at 3,233 venues over the weekend for $17.1 million since Thursday—an unusual opening done to take advantage of Good Friday crowds. The original Miss Congeniality bowed to $13.9 million in its first four days during the more competitive Christmas 2000 weekend and enjoyed a long run to $106.8 million. The sequel, star and producer Sandra Bullock's first movie since Two Weeks Notice in 2002, likely won't make half that.

Instead of coming off as the further adventures of Bullock's Agent Gracie Hart, Miss Congeniality 2 seemed to dump what the character learned from the first movie, in addition to co-stars Michael Caine and Benjamin Bratt. When a sequel negates what happened in its beloved predecessor, it fails to attract the same crowds. Bridget Jones: The Edge of Reason had that problem last fall, not to mention Speed 2, Bullock's last sequel in 1997.

In general, making successful sequels to hit comedies is a tough business, littered with disappointments like Analyze That and The Whole Ten Yards, Another Stakeout and Sister Act 2: Back in the Habit. Legally Blonde 2: Red, White and Blonde was one of the more successful ones, retaining 93 percent of its predecessor's gross.

The difference in the two Miss Congeniality movies can be boiled down to the posters. Miss Bullock in beauty pageant garb with a gun holster peeping through on her leg was simply more iconic and striking for the first movie than Miss Bullock in a vague showgirl outfit with the holster out in the open on her bare leg for the second.

Meanwhile, The Ring Two saw the box office equivalent of falling down a well, dropping 61 percent to $13.6 million. In 10 days, the horror sequel has amassed $57.9 million, 18 percent behind The Grudge at the same point.

• Katharine Hepburn: A Woman for All Seasons

NOTE: This report was originally published on Sunday, March 27 and was updated on Monday, March 28 with actual grosses.