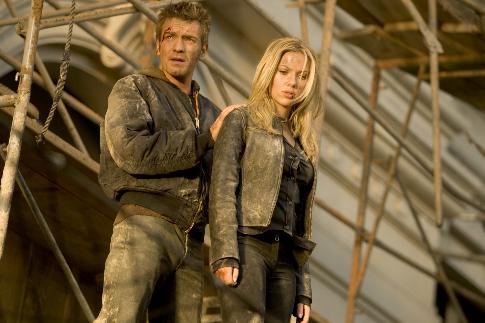 "Clearly, this is a disappointing opening," said DreamWorks' head of distribution Jim Tharp. "The tracking had indicated that we were looking at this kind of opening, but it is still disappointing. I liked the movie. We can only hope the film finds an audience down the road." According the studio's exit polling, 51 percent of the audience was male and 52 percent was over the age of 25.

Gone from the equation were an appealing premise and savvy marketing. The Island had a genre identity crisis, crudely mixing futuristic sci-fi with present-day action in what looked like a cross between Logan's Run and The 6th Day. Since sci-fi can be a tough sell, the ads quickly dispensed with any sense of mystery, and they didn't develop characters to draw audiences into the movie's world. Instead, they showcased the generic spectacle. The plot seemed to be revealed in the trailers with the refrain that there is no Island—and the fact that there's no island in a movie called The Island was pounded into potential moviegoers. The natural reaction was indifference.

Clinging to the top spot, Charlie and the Chocolate Factory churned out $28.3 million after a somewhat sour 50 percent drop. The total stands at $114.1 million in 10 days. Wedding Crashers made a more impressive splash with a potent hold. The raunchy $40 million comedy dipped just 24 percent to $25.7 million, ringing up $80.4 million in 10 days. By comparison, last summer's comedy hit, DodgeBall: A True Underdog Story, fell 38 percent in its second weekend.

Bad News Bears fouled out with $11.4 million at 3,183 theaters. The $35 million movie was the third of the summer about an unlikely coach of a ragtag kids' sports team and the third to disappoint, after Kicking and Screaming and Rebound. It was also Paramount's second remake of a 1970's sports comedy following the successful The Longest Yard. "[The opening] was within the ballpark of where we thought it would be," said Paramount's head of distribution, Wayne Lewellen. The studio's exit polling indicated that moviegoers were 52 percent male and 68 percent over 12 years old.

The casting of Billy Bob Thornton under the direction of School of Rock's Richard Linklater was promising, and the 1976 original, though well loved and influential to the genre, wasn't exactly a sacrosanct classic, aside from the inimitable Walter Matthau's presence. However, the final product appeared rote, like a repetition of Bad Santa with Thornton's trash outrageously interacting with children. It lacked strong characterizations for the kids and the fish-out-of-water contrast of Jack Black teaching prep school in School of Rock.

The only opener to post decent numbers was Hustle and Flow. In one weekend, the drama about a pimp who wants to be a rapper became the highest grossing picture ever for distributor Paramount Classics, picking up $8 million at 1,013 locations. The movie was produced for $2.8 million, but Classics purchased the rights for $8 million. Classics teamed up with corporate sibling MTV, gaining loads of exposure from the network, and the movie is one of the few adult choices in the market. According to studio exit polling, 64 percent of the audience was over 25 and 60 percent was female. "It's a great success story, and, given the very positive reviews, the picture has a long way to go," said Lewellen.

The Devil's Rejects ripped $7.1 million out of 1,757 sites. Though small, director Rob Zombie's $7 million murder spree doubled the opening of its predecessor, House of 1,000 Corpses.

Among holdovers, War of the Worlds stormed past the $200 million mark on its 24th day of release. Though the second highest grossing picture of the season, Steven Spielberg's alien disaster pales compared to his past creature features and failed to gain traction after a powerful opening. On the other hand, Batman Begins enjoyed its strongest hold yet, down 22 percent to $4.7 million. With $191.1 million in 40 days, the Caped Crusader's resurrection is certain to top $200 million.

Warner Bros. sneaked Must Love Dogs at 800 theaters on Saturday night. The romantic comedy played to 80 percent capacity on average and attracted an audience that was 60 percent female, the studio said.

NOTE: This report was originally published on Sunday, July 24 and was updated on Monday, July 25 with actual grosses.