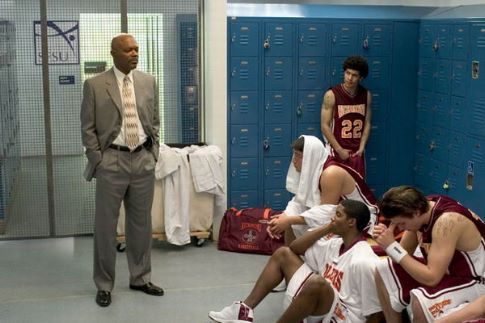 According to Paramount's exit polling, 52% of Coach Carter's audience was female, and 55% was under the age of 25. Overall, moviegoers loved the picture as over 90% would "definitely recommend" it across all demographic quadrants, and 95% rated it either "excellent" or "very good."

"Coach Carter came in above our expectations, and I think it's going to be around for awhile," Paramount's head of distribution Wayne Lewellen told Box Office Mojo. "The audience was older than you'd expect for MTV." In addition to traditional marketing, Lewellen said the studio conducted an extensive screening program across the nation to build buzz, a strategy they also employed successfully with Mean Girls among others.

Paramount's teaming with Viacom bench mate MTV Films meant that corporate synergy was in full effect to promote Coach Carter. MTV's highest grossing movie Save the Last Dance, which was also directed by Coach Carter's Thomas Carter, was released on the same four-day holiday frame in 2001 and bowed to $27.5 million at 2,230 venues on its way to $91.1 million. Another MLK weekend hit for MTV was another sports drama, Varsity Blues in 1999.

Coach or teacher movies based on true people and events have consistently proven lucrative. Count Remember the Titans, Dangerous Minds, Miracle, Friday Night Lights, Lean On Me, Hoosiers and Stand and Deliver among the hits the genre has yielded, and Coach Carter had a bigger opening than all of them.

Coach Carter, based on the actions of a defiant high school basketball coach named Ken Carter, is the kind of role people want to see Samuel L. Jackson in. He's the tough yet cool guy who knows the score, and his commanding presence is perfectly suited to playing a principled authority figure like Coach Carter. Matching an actor's persona with the right movie has always been an effective way to draw a crowd, and it is not easy; star showcases often disappoint, making Coach Carter's opening weekend an even sweeter victory.