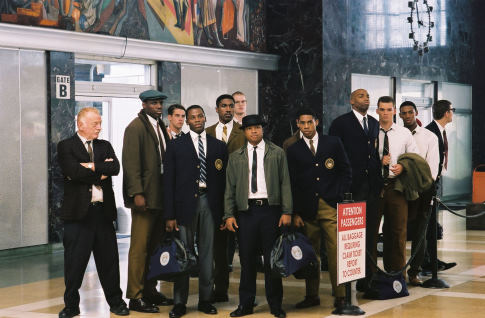 'Glory Road' Glides Past 'Hoodwinked' in MLK Photo Finish
January 17, 2006 17:38 PST - By Brandon Gray - Box Office News
Duking it out for the top spot, Glory Road and Hoodwinked bowed within $50,000 of each other, and that close race was the most exciting thing that transpired over the four-day Martin Luther King, Jr. weekend.

On Monday morning, Hoodwinked's distributor, The Weinstein Company, estimated that their picture would be No. 1 with $16.6 million, while distributor Buena Vista contended that its movie, Glory Road, would win with an estimated $16.5 million.

According to standard practices, the weekend estimates were based on solid estimates for Friday, Saturday and, in this case due to the holiday, Sunday plus a projection for Monday—the latter being the number the studios essentially make up with historical antecedents and other indicators as their guide. Glory Road was already the decisive victor of the three-day weekend, but Hoodwinked came on strong on Saturday and Sunday, and family pictures tend to do greater business on Martin Luther King, Jr. day.

Once actual grosses poured in, Buena Vista claimed it had underestimated Monday by over $400,000, and Glory Road emerged atop the four-day weekend chart, netting $16.93 million from 2,222 venues. Hoodwinked bamboozled $16.88 million from 2,394 theaters.

With mostly uninteresting new pictures, overall business was down eight percent from the holiday frame last year, which had stronger movies when lined up against this year, including Coach Carter and Racing Stripes.

Settling for second place, Hoodwinked was arguably more impressive than Glory Road, given the computer-animated comedy's lower budget and even lower expectations. M.L.K. weekend has seen similar surprises in the past—the astonishing successes of Snow Dogs and Kangaroo Jack persuaded Hollywood to release more family pictures at this time of year.

"I think the industry had us pegged at $10 million for the four days," said Mike Rudnitsky, Weinstein Company senior executive vice president of distribution. "But tracking is always unpredictable for these kinds of movies. This picture was originally scheduled to go out on Christmas, when there were a lot of family movies. I thought it would be suicide, and mid-January is traditionally a terrific time for children's movies."

The first of over a dozen computer-animated movies scheduled for 2006—a record amount that more than doubles the output of any past year—Hoodwinked's primary audience was parents with their four to 12-year-old children, Rudnitsky noted, and 55 percent of moviegoers were male.

Hoodwinked cost less than $20 million to make, and, though the pop culture riff on Little Red Riding Hood made a fraction of fellow fractured fairy tale Shrek, the opening more than doubled the last low-rent computer-animated affair, Valiant.

Glory Road traveled down the well-trod path of Remember the Titans and Coach Carter and came up short. Buena Vista re-teamed with Titans' Jerry Bruckheimer—the mega-producer who made Kangaroo Jack a hit among many other movies and television shows—but the basketball drama based on a true story lagged behind the comparable Carter's $29.2 million on the same weekend last year.

Buena Vista's president of distribution, Chuck Viane, denied that Coach Carter was a significant factor in opening Glory Road on this weekend, despite the fact that the release date was selected in the wake of Carter's success and Glory Road's trailer touches upon the players' grades like Carter did.

"For me, I will take any holiday anytime to release one of my movies," Viane said. "It's a great weekend for business, and I chose it because I believe this is the time of year where basketball really starts to take on a momentum. It's just a natural time to go." Buena Vista's exit polling indicated that the audience was 52 percent male and 50 percent couples.

Last Holiday, a $45 million remake of the 1950 Alec Guiness picture of the same name, was diagnosed with a benign $15.5 million at 2,514 sites. The comedy's three-day opening was the same as lead Queen Latifah's last picture, Beauty Shop. Distributor Paramount Pictures' research suggested that 74 percent of moviegoers were female, 69 percent were over 25, and 48 percent were black.

Tristan and Isolde unsheathed a modest $7.6 million from 1,845 locations. The 20th Century Fox-released love story, billed as being "before Romeo and Juliet," was, in part, a casualty of its medieval times milieu—the sub-genre is consistently unappealing commercially and includes such disappointments as King Arthur, First Knight and Kingdom of Heaven. Tristan and Isolde also came from another tradition of failure—it was one of the final movies produced by the defunct Franchise Pictures, the notoriously unsuccessful company behind such flops as Battlefield Earth, Ballistic: Ecks vs. Sever and A Sound of Thunder.

Brokeback Mountain reached nationwide release with the addition of 200 theaters for a total of 683, but three-day business remained even with last weekend. For the long frame, the $14 million drama roped $7 million, and the total stands at $32.1 million in 39 days. Distributor Focus Features plans to add 200 theaters next weekend.

Among other holdovers, The Chronicles of Narnia: The Lion, the Witch and the Wardrobe's crusade to out-gross Harry Potter and the Goblet of Fire is on track—the family fantasy has amassed $264 million after a $12.8 million weekend, and it needs about $25 million more to ultimately top Goblet.

NOTE: This report was originally written on Monday, Jan. 16 and was updated on Tuesday, Jan. 17 with actual grosses and additional reporting to account for the photo finish for the No. 1 spot.