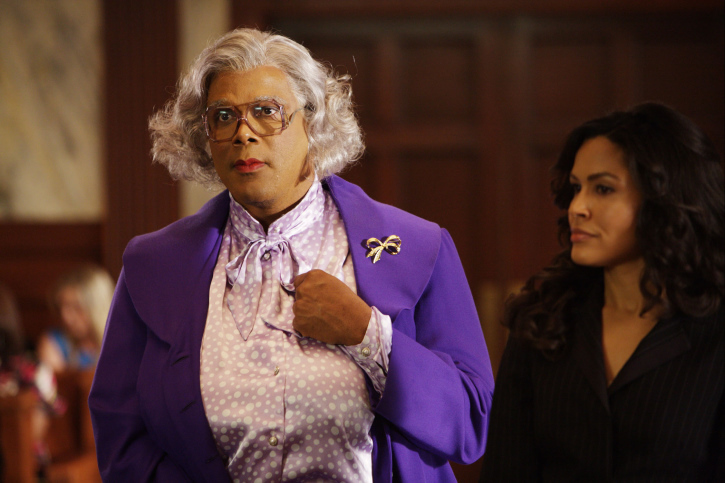 ‘Madea’ Goes to Town
February 23, 2009 14:20 PST - By Brandon Gray - Box Office News
Madea under lockdown put the smackdown on the weekend box office, once again demonstrating the allure of a man cross-dressing as a big, fat granny. Collectively, all movies playing grossed more than $142 million, up 29 percent over the comparable timeframe last year and making this the biggest post-President's Day weekend on record.

Tyler Perry's Madea Goes to Jail busted out of the gates with $41 million on approximately 2,800 screens at 2,032 theaters, nearly matching the initial attendance of The Nutty Professor (1996) and beating Norbit's debut among similar movies. The latest adventure of Tyler Perry's popular gun-toting, straight-talking granny character also served up the third biggest-grossing start at less than 2,500 theaters (without factoring inflation). The last Madea-centered picture, Tyler Perry's Madea's Family Reunion, packed a $30 million opening on this same weekend in 2006 and was the highest-grossing movie of the Tyler Perry franchise with a final tally of $63.3 million. Fat-suit comedy seems to have perennial appeal, at least on opening weekend, from Mrs. Doubtfire to Big Momma's House.

Coraline logged the smallest drop among very wide holdovers. Off 23 percent, the stop-motion animated feature made $11.4 million over the weekend, and its total crept up to $53.8 million in 17 days, exceeding the final gross of Tim Burton's Corpse Bride. Those grosses include 3D presentations that again accounted for most of the business. Of the picture's 2,155 theaters, 1,098 were 3D, and they generated an estimated $8.8 million, down 19 percent for a $39.3 million tally or 74 percent of the overall gross.

The two stalwarts from January, Taken and Paul Blart: Mall Cop, continued their prodigious runs. Taken retreated 41 percent, its steepest drop yet, but better than most this weekend and solid by genre standards. Ranking third, the action thriller claimed $11.3 million, accumulating $95 million in 24 days. Paul Blart shed 38 percent and grossed $6.8 million for $121.2 million in 38 days.

Last weekend's top grosser, Friday the 13th, was slashed severely in its second weekend. While this type of picture tends to hemorrhage after opening, the horror remake had the largest drop of its ilk and the sixth-biggest among all nationwide releases on record. Down 80 percent, it mustered $7.9 million for $55.1 million in ten days. At this rate, it won't come close to the popularity of Freddy Vs. Jason or The Texas Chainsaw Massacre.

Following Valentine's Day, He's Just Not That Into You tumbled 56 percent to $8.6 million for $70.1 million in 17 days, putting it on par with Failure to Launch among past romantic comedies. Losing footing after a disappointing start last weekend, Confessions of a Shopaholic dropped 55 percent to $6.7 million for $27.4 million in ten days. The International showed little traction as well after its soft debut. The action thriller fell 52 percent to $4.5 million in its second weekend for a $17 million tally.

Oscar contenders received one last uptick leading up to the announcement of the winners Sunday night. Reaching very wide release for the first time in anticipation of Oscar gold (610 theaters were added for a total of 2,244), Slumdog Millionaire was up 15 percent to $8.4 million over the weekend, rising to fifth place and bringing its total to a terrific $98.4 million. The Reader ratcheted up 20 percent to $2.6 million for a $23 million total, while Milk and Frost/Nixon received bumps as well.