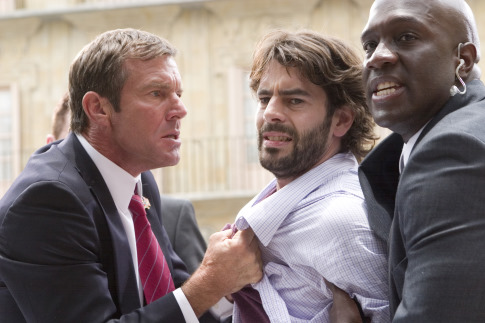 Vantage Point pieced together an estimated $24 million on approximately 3,800 screens at 3,149 theaters, a starting gross in the upper echelon of the political thriller sub-genre and comparable to The Interpreter. Produced for nearly $40 million, the picture was sold as a slick action mystery, centered on the political intrigue of a reliable assassination plot. According to distributor Sony's exit polling, 52 percent of the audience was male and 51 percent was under 30 years old.

Three comedies displayed business more typical of late February. Be Kind, Rewind gave the most pause, emitting a dull estimated $4.1 million at 808 sites, though quirky movies about movies like this tend to operate at a low frequency. Witless Protection and Charlie Bartlett were merely blips with an estimated $2.2 million and $1.8 million, respectively. Also reaching nationwide release was concert movie U2 3D. It failed to pop, drawing an estimated $1 million at 686 venues or a fraction of the attendance of the band's previous movie, U2: Rattle and Hum, a theatrical disappointment from 1988.

Last weekend's three top grossing pictures, Jumper, The Spiderwick Chronicles and Step Up 2 the Streets, held within normal post-Presidents Day ranges. With a similar drop but much lower gross than last year's Ghost Rider, Jumper fell 54 percent to an estimated $12.7 million, propelling its total to $56.2 million in 11 days. The Spiderwick Chronicles faded 34 percent or about the same as Bridge to Terabithia last year and grossed an estimated $12.6 million for $43.6 million in 11 days. Step Up 2 the Streets had a slightly smaller decline than the first Step Up, down 48 percent to an estimated $9.8 million, though it's a tad behind in its 11-day total with $41.4 million.

As a whole, 2007's crop of Best Picture Oscar nominees has been more popular than the ones from 2006 and 2005, and Juno will soon be the highest grossing nominee in four years. The nominees again had the best holds among wide releases. No Country for Old Men added more theaters and rose 21 percent to an estimated $2.3 million, bringing its total to $64.2 million. Juno was down 11 percent to an estimated $4.1 million for a $130.4 million tally and There Will Be Blood and Atonement were also off less than 20 percent.