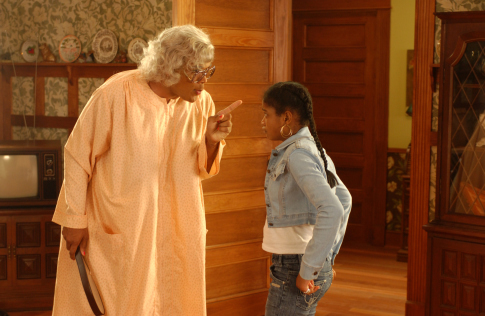 'Madea' Drags Moviegoers to 'Family Reunion'
February 27, 2006 14:53 PST - By Brandon Gray - Box Office News
Gun-toting, big-boned grandma Madea kicked the grits out of the competition with a winning combination of warmth, relatability and, above all, humor.

Tyler Perry's Madea's Family Reunion gathered $30 million at 2,194 theaters, drawing 38 percent more patrons out of the gate than Madea's first outing, Diary of a Mad Black Woman. The market's overall business, though, was off two percent relative to the same weekend last year, when Diary surprised the industry with $21.9 million at 1,483 venues.

Written and directed by playwright Tyler Perry, who plays three roles (including Madea), the Gospel-rooted mix of melodrama and sitcom cost only $6 million to make, or about the same as Diary, which grossed $50.3 million by the end of its run.

"The first reason [for Madea's success] is that Diary was very satisfying to its core audience," said Lions Gate's president of domestic distribution, Steve Rothenberg. "Second, Diary had a tremendous afterlife on DVD. And, third, Tyler [Perry], by working so hard promoting it, got more of a crossover audience."

Though Madea is a supporting character, Perry and Lions Gate's marketing revolved around her, including a teaser trailer of Madea strolling down the street to the tune of the Isley Brothers' "That Lady." That's because sassy fat-suit, cross-dressing comedy sells—Madea follows the successful $27.7 million debut of Big Momma's House 2 a month ago.

Lions Gate noted that while the theater count grew nearly 50 percent for Madea over Diary, the per theater average was similar—$13,687 for Madea versus $14,770 for Diary. The sense, though, was that Madea didn't need all of its 2,194 theaters to attain its lofty height, and there are no plans for significant expansion. "I believe that we're in all the right theaters," said Rothenberg. "I'm not sure there's much room for expansion."

Rothenberg was hopeful for another Perry movie next year, but plans have not been firmed up yet. "We've had great success with the final weekend of February, so certainly we'll try that again," he said.

The final weekend of February is traditionally a tough time to debut movies, and the other new wide releases bore this out. The computer-animated Doogal and the crime thriller Running Scared posted pathetic starts of $3.6 million and $3.4 million, respectively.

Doogal was an acquisition of a European production, titled The Magic Roundabout, by The Weinstein Company, which re-purposed it for domestic audiences. It made a fraction of Weinstein's other animation acquisition, Hoodwinked, which drew from the Little Red Riding Hood fairy tale. Doogal had no such audience recognition, leaving it adrift in a market already dominated by other family pictures.

New Line Cinema picked up domestic rights to Running Scared for $6 million and gave it a decent marketing push, including a Super Bowl ad. The distributor tried to sell the picture on its intense and wild action in a market ripe for an adrenalin-pumping hit, but it looked neither intense nor wild enough to overcome an unappealing premise of a common hood (Eight Below's Paul Walker) trying to retrieve a gun used to kill a dirty cop. These flashy crime pictures tend to under-perform, from True Romance to last year's Domino.

Among holdovers, Eight Below enjoyed the smallest dip among wide releases, down 21 percent to $15.9 million. Buena Vista's crowd-pleasing family adventure about stranded sled dogs has lapped up $45.2 million in 10 days and is on its way to becoming one of the biggest hits of the season.

Also aiming for families, albeit in bawdier and sillier fashion, The Pink Panther picked up $11.1 million, down 34 percent in its third weekend. Steve Martin's Clouseau redux has snared a solid $60.8 million in 17 days.

NOTE: This report was originally written on Sunday, Feb. 26 and was revised on Monday, Feb. 27 with actual grosses.