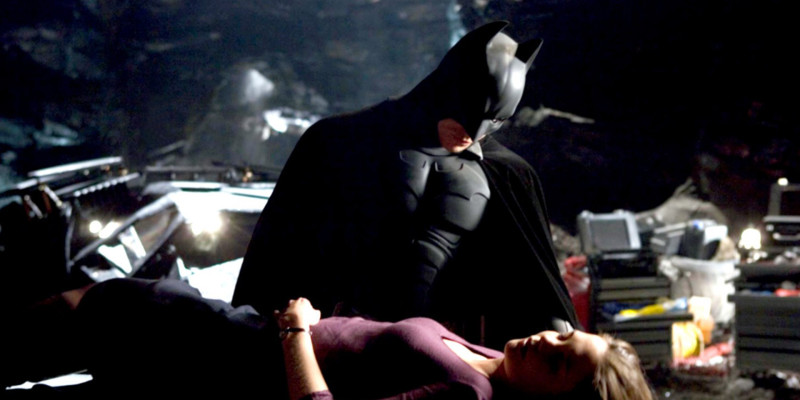 Fighting the stigma of the franchise's previous flame-out, Batman Begins had a relatively quieter start than its predecessors, but it was still popular out-of-the-gate. The movie, which was tasked with rebuilding the franchise, pulled in $48.7 million at 3,858 sites over the weekend, tallying $72.9 million since its Wednesday debut. Mr. & Mrs. Smith was second with $26 million, down a standard 48 percent from its opening. The weekend's only other nationwided release was Hilary Duff vehicle The Perfect Man, which was a non-starter with $5.3 million at 2,087 sites. • Weekend Report: 'Batman' Begins in the Shadows

Shaft claimed the top spot with $21.7 million at 2,337 locations, which was a solid but unspectacular showing for the Samuel L. Jackson-headlined remake of the 1971 movie of the same name. In second, Gone in 60 Seconds slowed 41 percent in its second weekend, grossing $14.9 million, followed by Big Momma's House and Mission: Impossible II in another photo finish. This was also the weekend of box office debacle Titan A.E., which drew $9.4 million at 2,734 locations. Animated sci-fi adventures typically disappoint at the box office, yet a lot was invested in Titan despite how tough of a sell it was. Freddie Prinze Jr. comedy Boys and Girls also debuted, but it attracted few patrons, grossing $7 million at 1,983 locations. • Weekend Chart

Like the weekend before, there was only one new nationwide release, but it was a doozy. Batman Forever raked in $52.8 million at 2,842 venues, shattering the opening weekend gross record held by Jurassic Park. The previous two Batman had also set that benchmark before: the first movie with $40.5 million in June 1989 and Batman Returns with $45.7 million in June 1992. Forever continued the previous movies' trend of casting big names as the villains; in this case, Jim Carrey (in his prime) as the Riddler was a key driver. Little else of significance transpired, though Congo plummeted a whopping 57 percent to $10.7 million in its second weekend. • Weekend Chart

Hoping to be the next comic-to-big-screen smash like Batman from the previous June, Dick Tracy struck with $22.5 million at 2,332 theaters, ranking as the third-biggest opening of the year behind Total Recall and Teenage Mutant Ninja Turtles (though there was some controversy about Disney counting preview grosses toward the weekend). The colorful picture's casting was Batman caliber, featuring Warren Beatty (who also directed and produced) as the lead and Al Pacino as the villain as well as Madonna (her song "Vogue" from the soundtrack was the real blockbuster), but the property simply didn't have the built-in popularity and cool factor of Batman.

Gremlins 2: The New Batch was also unleashed on this weekend, six years after the first Gremlins became a huge hit. The moment had passed, and the sequel aimed for zaniness over the original's more homespun horror. That led to a smaller opening: $9.7 million at 2,075 theaters, ranking fourth for the weekend behind Dick Tracy and holdovers Another 48 HRS. and Total Recall. • Weekend Chart

Cocoon hatched at 1,140 locations and led the weekend with $7.9 million, ending Rambo: First Blood Part II's reign. That may sound like a small change, but it was the seventh biggest opening of the year up to that point (and from fewer theaters than the movies above it). Another alien-themed movie also debuted: horror-tinged Lifeforce, which came in fourth behind Rambo and The Goonies with $4.2 million at 1,526 locations. Return to Oz, a dark follow-up to The Wizard of Oz, also debuted but was largely ignored, grossing $2.8 million at 1,238 locations. • Weekend Chart