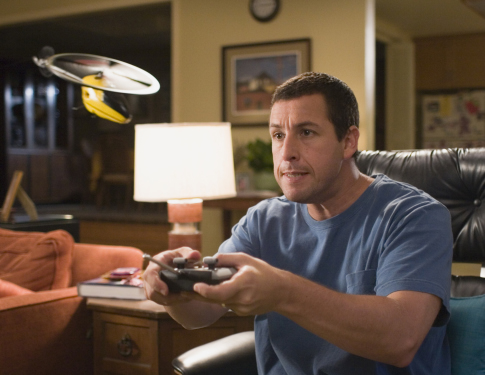 If Click's opening lacks excitement, it's because it's the seventh Adam Sandler picture to open to over $35 million. The comedian has had a remarkably consistent track record since his Waterboy breakthrough in 1998—only one of his major comedies has failed (Little Nicky), and the other six ultimately grossed well over $100 million. Like Jim Carrey, there are few more formidable box office draws than Sandler in a comedy.

"Adam's a smart guy, and I think he listens to his audience in regards to what they like," gushed Rory Bruer, president of domestic distribution for Sony, which saw its seventh No. 1 of the year with Click. "He just seems to be such an accessible star to his audience. I feel really good about how the film's going to hold, because the story has such a broad appeal to adults and families."

Aiming for more sentiment amidst his usual sophomoric antics, the $83 million Click marked Sandler's first major comedy in which he plays a family man and his second to have a fantastical gimmick after Little Nicky. The tenor of the marketing was what wild and crazy things would happen if Adam Sandler could do whatever he wants—via a universal remote control bestowed upon him by Christopher Walken—in a similar vein as the "What if Jim Carrey were god?" angle of Bruce Almighty.

According to Sony's exit polling, 51 percent of the audience was female, while 50 percent was under 25 years old. Moviegoers rated Click a "B+" in pollster CinemaScore's research.

The weekend's other wide release, Waist Deep, out-gunned expectations, lifting $9.4 million at 1,004 locations. "It was strategically positioned to counter-program to the African-American community," said Jack Foley, head of distribution of Focus Features, which handled Waist Deep through its Rogue Pictures label. Foley noted that 83 percent of the audience was black and that the norm for similar pictures was $7 million to $8 million, like last summer's Hustle and Flow.

What may have put the urban action picture over the top was its appeal to women, for which Foley credited lead actor Tyrese Gibson. "57 percent of the audience was female, and more than half were between 18 and 25," said Foley.

In its third weekend, Cars leveled off, easing 31 percent to $23.3 million. Pixar's seventh computer-animated feature has racked up $156.7 million in 17 days, trailing most of its predecessors but on track to top $200 million.

Overall, the weekend was up nine percent from the comparable frame in 2005 when Batman Begins was perched at the top spot for the second time. Now at $1.55 billion, the summer box office is slightly ahead of last summer through the same point.

NOTE: This report was originally written on Sunday, June 25 and was revised on Monday, June 26 with actual grosses.