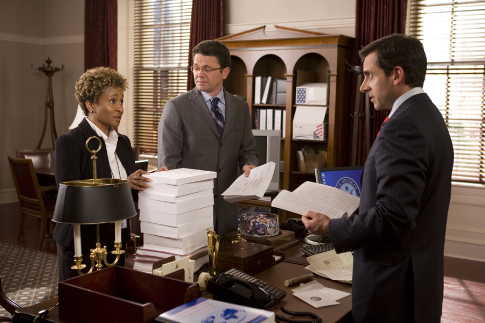 'Evan' All Wet, '1408' Occupied
June 25, 2007 16:27 PDT - By Brandon Gray - Box Office News
Though it cost more than twice as much to make, Evan Almighty wasn't nearly as powerful as Bruce Almighty, delivering an opening less than half the size.

Universal Pictures' religious comedy sequel loaded $31.2 million on approximately 5,200 screens at 3,604 theaters, compared to Bruce Almighty's $68 million start four years ago as well as Click's $40 million this time last year. The Noah's Ark-themed Evan sold about as many tickets as Dr. Dolittle 2, another animal-stocked sequel aimed at a family audience, did on the same weekend in 2001.

At least $175 million was expended on the making of Evan Almighty, while Bruce Almighty carried a production budget of $81 million. Bruce grossed $242.8 million by the end of its run, but one of its main assets, star Jim Carrey, did not return for Evan. Evan should retain more of its predecessor's audience than previous Carrey-free sequels (Dumb and Dumberer: When Harry Met Lloyd and Son of the Mask) as there is more franchise continuity, including Morgan Freeman as God and the new lead, Steve Carell, who had a small part in Bruce.

Besides Carrey, Bruce Almighty had a broadly-appealing premise—"what if you were God?"—whereas Evan Almighty was less secular, riffing on a specific story from the Bible. Evan also suffered from passivity. Carell's put upon in the movie, whereas Carrey was empowered to do whatever he wanted in Bruce, from circumventing everyday annoyances to flights of fancy. What's more, while Evan's animal angle was intended as a selling point for families, it amounted to a half measure since the animals were effectively inert, only making appearances rather than being integrated into the proceedings.

In second place, 1408 had the weekend's most impressive start. The Stephen King-based hotel horror checked in with a solid $20.6 million at 2,678 sites. It was the highest-grossing debut yet for a King adaptation, topping the similarly-themed Secret Window, and a rare winner for distributor MGM. 1408 lead John Cusack previously had comparable success with the motel thriller Identity in 2003.

Also opening, A Mighty Heart posted a faint $3.9 million at 1,355 locations. The docudrama marks another box office disappointment for lead Angelina Jolie, who has never carried a popular picture on her own. Her only hits have been action fare like Mr. & Mrs. Smith and Lara Croft: Tomb Raider.

Ocean's Thirteen fared well in its third weekend, grossing $11.4 million for $91.1 million in 17 days. Currently tracking ahead of Ocean's Twelve but behind Ocean's Eleven, it should begin to lag behind Twelve next weekend.

Knocked Up had the best hold among wide releases, down 22 percent to $11 million. With $109.3 million in 24 days, the comedy will surpass the final total of its makers' last picture, The 40-Year-Old Virgin, on Monday.

NOTE: This report was originally written on Sunday, June 24 and was revised on Monday, June 25 with actual grosses.