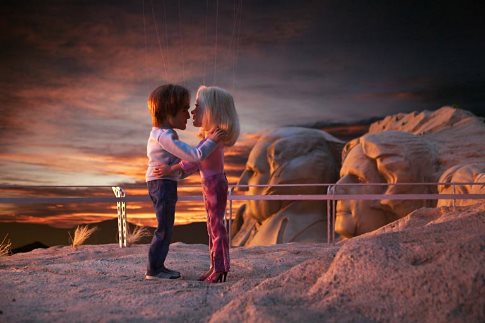 The massively-hyped mock-and-shock comedy scuttled the two new mega-wide family pictures, The Santa Clause 3: The Escape Clause and Flushed Away, to second and third over the weekend. Overall business, though, was down four percent from the same frame last year when Chicken Little and Jarhead debuted.

Borat: Cultural Learnings of America for Make Benefit Glorious Nation of Kazakhstan packed $26.5 million from around 1,100 screens at 837 theaters, boasting the highest-grossing wide opening ever for a picture playing at less than 1,100 theaters (The Blair Witch Project did $29.2 million at 1,101 sites). The closest recent comparison in terms of release pattern and style was Fahrenheit 9/11, which started with $23.9 million at 868 venues.

"I was hoping to see $15 million," said Bruce Snyder, Fox's president of distribution. "It's the perfect set-up to go to 2,200 to 2,500 theaters next week. We wanted to get Borat sampled in the best possible way and watch it grow from there. It plays to everybody as opposed to a Jackass audience that opens and fades." Fox's exit polling indicated that the audience was 55 percent male and 53 percent under 25 years old.

Culture clash is a consistently popular type of comedy, and Borat is not the first to have fun with characters from Easter Europe or the former Soviet Union, hearkening Steve Martin and Dan Aykroyd's "wild and crazy guys" from television's Saturday Night Live among others. Borat further avoided the pitfalls of Snakes on a Plane and Team America with comedy set in the real world, like Fahrenheit 9/11 and Jackass. What's more, the first weekend of November has seen comic sensations before, including The Waterboy in 1998 and Elf in 2003.

Meanwhile, The Santa Clause 3 delivered $19.5 million from 4,400 screens at 3,458 locations, grossing less than the $29 million debut of The Santa Clause 2, which faced no direct competition in its day. More often than not, second sequels in the family genre make significantly less than their predecessors.

"We're well positioned to enjoy the fruit of the holiday season," said Chuck Viane, Buena Vista's president of distribution. "We knew that animation [Flushed Away] at this time of year was going to be extremely difficult for us in head to head competition. But we felt, for the long term, this was the best time to release it." Buena Vista's research suggested that 60 percent of Santa's audience was female and 52 percent was over 25.

Right on Santa Clause's tail was Aardman and DreamWorks Animation's Flushed Away with $18.8 million from 4,800 screens at 3,707 sites. Distributed by Paramount Pictures, the computer-animated comedy had a stronger start than Aardman's last picture, the stop-motion Wallace and Gromit: The Curse of the Were-Rabbit, which began with $16 million and ended with $56.1 million, but was below average for C.G.

"Flushed Away opened above just about anyone's expectations," said Don Harris, Paramount's executive vice president and general sales manager, noting that exhibitors were comparing it to Wallace and Gromit. Harris noted that Flushed Away's release date had been set two years ago, prior to Santa Clause 3. "We also had tie-ups with promotional partners, so we were contractually bound to stay on the date we picked," Harris explained. "When we looked at the competitive landscape, we thought this was the best date for us anyway."

Adult-oriented holdovers generally saw minor drop-offs. The Departed eased 22 percent to $7.7 million for a $102 million tally in 31 days, and it's a day or two away from eclipsing The Aviator as director Martin Scorsese's top grosser. Also down 22 percent, The Prestige conjured $7.5 million, lifting its tally to $39.1 million in 17 days. Flags of Our Fathers, though, retreated further from that company, dropping 30 percent to $4.4 million for $26.6 million in 17 days.

NOTE: This report was originally written on Sunday, Nov. 5 and was revised on Monday, Nov. 6 with actual grosses.