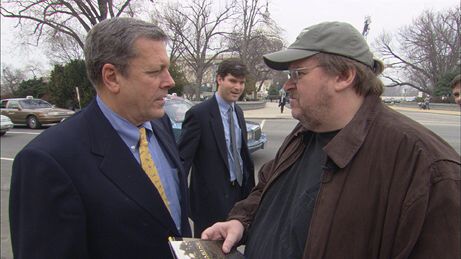 Incensing as many as it's entrancing, writer-director Michael Moore's Bush bash celebrated over the weekend with $23.9 million at 868 theaters, beating co-distributor Lions Gate's $21.8 million estimate on Sunday by 9%. Lions Gate released the picture along with IFC Films and Fellowship Adventure Group—the latter quickly formed by Miramax chiefs Bob and Harvey Weinstein to release the $6 million picture after buying it back from corporate parent Disney. Around $10 million was spent on prints and advertising, less than a third of the average Hollywood release.

The estimate for Fahrenheit 9/11 was trounced thanks to a much stronger than expected Sunday. Breaking the weekend down, the picture attracted nearly $8.6 million on Friday, fell 5% on Saturday to about $8.1 million, but then eased just 12% to around $7.2 million on Sunday. By comparison, the other wide releases in the marketplace experienced Sunday drops ranging from 22% to 35%.

With $24.1 million in the till since its record-breaking debut in New York City on Wednesday, Fahrenheit 9/11 is already the highest grossing documentary of all time—excluding large format, concert and other non-"apples-to-apples" sub-genres—surpassing Moore's own Bowling for Columbine's $21.6 million lifetime gross.

Fahrenheit is also the first documentary to land in the weekend top five, let alone be No. 1. Its opening topped Quentin Tarantino's Pulp Fiction's $9.3 million as the best ever for a Cannes Film Festival Palme d'Or winner, and it was Tarantino's jury that handed Moore the prize this year.

Fahrenheit's $27,558 per theater average ranks as the second highest all time for a wide release (adjusting for ticket price inflation knocks it down to No. 11) and the best of 2004, ahead of The Passion of the Christ's $27,554 and Shrek 2's $25,951. However, they were super-saturation releases playing at 3,043 and 4,163 theaters respectively—the lower the theater count, the easier it is to have a high average as the release isn't diluted by less populous locations with lower ticket prices.

Fahrenheit's performance harkens back to the days when big movies wouldn't play in every nook and cranny of the country, but would bow at around 700 or 1,000 theaters to sell out crowds. Perhaps the greatest example of this, Return of the Jedi debuted to $23 million at 1,002 theaters in 1983, which would adjust to $45 million by today's ticket prices. In terms of raw dollars, Fahrenheit is actually the biggest opening ever for a movie playing at less than 1,000 theaters, topping Rocky III's $12.4 million at 939 venues.

Controversy is proving to be bigger business than ever. Prior to this year, it was seen as a way to raise awareness and help bolster a picture to modest returns (Dogma, Last Temptation of Christ). Chatter about its global warming themes didn't hurt The Day After Tomorrow either, which opened beyond expectations and is a solid blockbuster with $175.6 million to date. But it was Moore and Mel Gibson with The Passion of the Christ who have taken it to the next level: Controversy as saturation marketing campaign.

Though The Passion is perceived as the opposite of Fahrenheit in terms of whom it appeals to, both Moore and Gibson enlisted today's mass media to work for them, knowing that everyone from 24-hour news channels to talk radio would eat up the grand hot topic issues of their movies with the littlest of stoking. Gibson took the more strategic approach with his surgical strike appearances and screenings, but he had months to wage his campaign. Fahrenheit didn't have a release date, let alone a distributor, until a few weeks ago, so Moore and company used the shotgun approach, showing up everywhere and heralding every single development of the movie's progress.

While Fahrenheit was all the rage in the media, moviegoers spread the wealth to other movies.

The Wayans brothers' latest ribald comedy White Chicks cross-dressed to success with $19.7 million at 2,726 theaters. Since its Wednesday bow, the $37 million Sony picture has grossed $27.2 million.

Among holdovers, Dodgeball was still slammin,' deflating by 38% to $18.8 million and a $67.5 million total after 10 days. The $20 million Fox comedy's hold was strong as youth appeal pictures tend to drop closer to 50%. After a relatively soft start, DreamWorks' The Terminal eased 31% to $13.1 million. In 10 days, the $60 million Steven Spielberg production has claimed $41.0 million.

There was one casualty. Family movie Two Brothers, in which The Bear director Jean-Jacques Annaud turns his attention to tigers, captured $6.1 million at 2,175 in ninth place. It was an acquisition for distributor Universal, so their financial exposure was limited.

NOTE: Box Office Mojo asked Michael Moore and company to comment for this story, but they wanted to screen the questions in advance. As policy, Box Office Mojo does not conduct interviews under such circumstances, so there will be no comment from them.