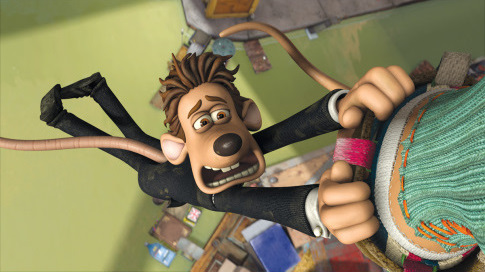 Overall business was about even with last year when Chicken Little spent a second weekend in first place. The second frame of November is usually topped by a holdover, while the last time the Top 3 repeated was the weekend of July 22, 2005 with Charlie and the Chocolate Factory, Wedding Crashers and Fantastic Four.

Fox reported that Borat's 837 holdover theaters were down about 30 percent, which means they accounted for $18.5 million of the movie's $29 million weekend and averaged $22,000 per site. The 1,729 additional theaters contributed $10 million, averaging less than $6,000 per site. In other words, the original theaters on average saw more than three and a half times the business of the new theaters.

Like its predecessors, The Santa Clause 3: The Escape Clause had a small second weekend drop, easing 13 percent to $16.9 million, but its $41.1 million in 10 days pales compared to The Santa Clause 2's $60 million through the same point. A tick behind at $16.6 million, Flushed Away was down a mere 12 percent and has scrounged up $39.8 million in 10 days, well ahead of the last Aardman animated feature, Wallace and Gromit: The Curse of the Were-Rabbit.

Though Stranger Than Fiction posted a ho-hum $13.4 million at 2,264 theaters, it was the only debut to register more than a blip. The "What If?" comedy's start was less than average for its sub-genre, and it was lead actor Will Ferrell's lowest-grossing wide opening since becoming a headliner. Distributor Sony claims the picture cost less than $30 million to make, and its exit polling suggested that 55 percent of the audience was female and 53 percent was under 30 years old.

Among other new releases, The Return, Rogue Pictures' generic horror movie, reaped a weak $4.5 million at 1,986 theaters. Director Ridley Scott and star Russell Crowe's romantic comedy-drama, A Good Year, was ignored, mustering $3.7 million at 2,066 venues or less than half of thematically-comparable pictures like Elizabethtown or Jersey Girl. Distributor 20th Century Fox said that the audience was 64 percent female and 88 percent over 25. Last and least, Harsh Times, an MGM-distributed crime drama with Christian Bale, scraped up a paltry $2 million at 956 sites.

NOTE: This report was originally written on Sunday, Nov. 12 and was revised on Monday, Nov. 13 with actual grosses.