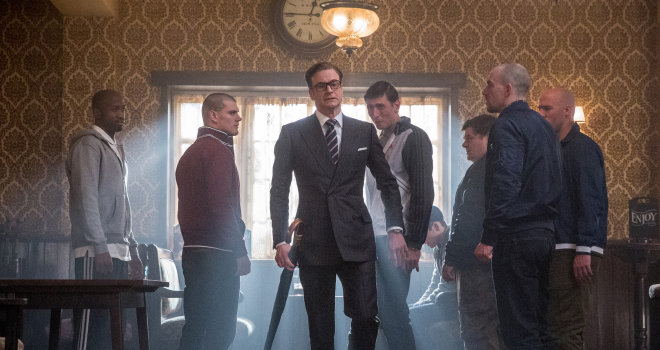 Fifty Shades was even more impressive at the international box office, where it opened to a stunning $158 million. For full overseas coverage, check out this weekend's Around-the-World Roundup.

The domestic box office Top 12 earned $200.7 million, which makes this the biggest weekend ever in February. It's also the highest-grossing weekend since November 2013 (meaning bigger than any weekend in 2014).

Playing at 3,646 theaters—the widest opening ever for an R-rated movie—Fifty Shades of Grey scored $85.2 million over the three-day weekend. That's the top opening ever in the month of February ahead of The Passion of the Christ; among R-rated movies, it ranks fourth behind The Matrix Reloaded, American Sniper and The Hangover Part II.

For the four-day weekend, it earned $93 million, which is 47 percent higher than the previous President's Day weekend record (Valentine's Day at $63.1 million).

Fifty Shades also opened noticeably higher than the first Twilight movie, which took in $69.6 million in its first weekend back in 2008. Adjusting for ticket price inflation, it looks like Fifty Shades had slightly higher initial attendance as well.

The movie's impressive debut doesn't come as a total surprise: as Universal readily pointed out in recent advertisements, the book upon which its based has sold over 100 million copies worldwide, which makes this a true literary phenomenon. Still, there was always a risk that those who read the book in private wouldn't be as willing to watch the movie's more explicit scenes in public.

Universal's marketing campaign addressed that issue by focusing on the romance over the sadomasochism, while also subtly suggesting there was more to see (if, of course, you bought a ticket). That strategy was more or less effective, though there's reason to believe a significant number of older book readers stayed away; specifically, Universal's exit polling indicated that 42 percent of the audience was under 25 years of age, which seems a bit high.

The success of Fifty Shades of Grey can also be attributed to a very smart scheduling decision. Originally, the movie was set to open in August 2014, but the start of production was delayed to the point where that date was no longer feasible. Instead of picking another fairly arbitrary date, Universal staked a claim to Valentine's Day. That move seems to have paid off, as the movie set a new Valentine's Day record with a massive $36.7 million (over 50 percent higher than the previous record). A chunk of that surely came from date night crowds; in general, men represented 32 percent of the Fifty Shades audience, which has to be significantly higher than the male share of book readers.

It's worth keeping in mind, of course, that the movie will almost certainly drop off quickly from here. Female-skewing literary adaptations tend to be fairly front-loaded—the Twilight sequels being the most radical version of this—as do romances that open over Valentine's Day weekend. Add in the fact that it's receiving mixed word-of-mouth ("C+" CinemaScore), and it's hard to see how Fifty Shades of Grey reaches $200 million.

A good comparison is Valentine's Day, which did 51 percent of its total business on this same weekend in 2010. If Fifty Shades performs similarly, it will ends its run with around $170 million.

Continued with a look at 'Kingsman: The Secret Service,' 'American Sniper' and more >>