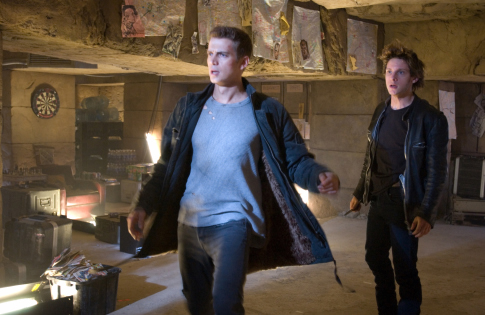 'Jumper' Teleports to the Top
February 18, 2008 16:00 PST - By Brandon Gray - Box Office News
After bustling business from January through early February, the box office softened as less appealing new titles entered the fray. Though satisfactory starts were posted by Jumper, Step Up 2 the Streets and The Spiderwick Chronicles, they did not compare to last year's cumulative President's Day frame, which was led by Ghost Rider's record holiday debut.

The movie with the widest target audience, Jumper, catapulted to the top of the weekend with an estimated $31.7 million four-day on approximately 4,600 screens at 3,428 sites. Exploiting the fun and spectacle of the characters' ability to teleport in its marketing campaign, the fantastical action thriller's opening was on the high end for one lacking popular source material like past President's Day champs Ghost Rider and Daredevil. Distributor 20th Century Fox claims the movie cost around $85 million to make and that its audience skewed under 25 years old with a near even split between genders.

By garnering about as much initial interest as its predecessor, Step Up 2 the Streets kicked off successfully with an estimated $21.5 million four-day on around 2,800 screens at 2,470 venues. In five days, the dance sequel has racked up $28.1 million, while the first Step Up's five-day start was $25.8 million on its way to a $65.3 million final, and the norm for these sequels is poor retention. Step Up 2 appeared to take the first one's story and merge it with You Got Served, upping the breakdancing displays to attract a greater percentage of males this time (40 percent versus 30 percent for the first movie), according to distributor Buena Vista's exit polling.

The latest fantasy spawned from the success of The Chronicles of Narnia, Lord of the Rings and Harry Potter series, The Spiderwick Chronicles spun an estimated $24.5 million on nearly 5,000 screens at 3,847 theaters. Though the opening gross was lower than Bridge to Terabithia on the same weekend last year, it wasn't too shabby considering the picture looked nearly indistinguishable from all the other recent fantasies in its advertisements. Distributor Paramount Pictures reported that the audience was 80 percent family and that the picture cost over $90 million to produce.

Also opening was Definitely, Maybe, which did moderate business befitting its non-committal title. The romantic comedy attracted an estimated $11.4 million at 2,204 locations. All four new nationwide releases opened on Valentine's Day Thursday, shaving off a bit of demand from the weekend.

Last weekend's top grosser, Fool's Gold, had a normal decline of 40 percent comparing proper Friday-to-Sunday frames and has dug up $44 million in 11 days. The movie was an attempt to replicate the success of How to Lose a Guy in 10 Days, the 2003 romantic comedy also featuring Matthew McConaughey and Kate Hudson that also debuted on the same pre-Valentine's Day weekend. However, How to Lose fell 19 percent and sold significantly more tickets at the same point. Also in its second weekend, Welcome Home Roscoe Jenkins tumbled 47 percent for $30.7 million in 11 days, ranking as a middling performer by lead actor Martin Lawrence's standards.

After tackling the Super Bowl weekend opening record in terms of gross but not in attendance, Hannah Montana/Miley Cyrus: Best of Both Worlds Concert Tour fizzled, in part because it was originally billed as a one-week event that increased the fan base's rush to see it before distributor Disney decided to extend the engagement. This weekend it was down 68 percent, but with $59 million in 18 days, the 3D event has fared extremely well for a concert movie. Despite most tickets costing $15 on average, its overall attendance appears higher than fellow Super Bowl opener, The Eye. The latter has had a meager run for such a high profile horror release.

The top grosser of the calendar year thus far has been Juno with $97 million and the dramatic comedy delivered another strong hold over the weekend, down 18 percent to bring its overall tally to $124.1 million. Fellow Best Picture nominee No Country for Old Men notched the smallest decline of the weekend among wide releases, off 15 percent for an impressive $61.3 million total. Other Best Picture nominees, There Will Be Blood, Atonement and Michael Clayton, haven't performed as well but have found larger audiences than other lower rung nominees of recent years.