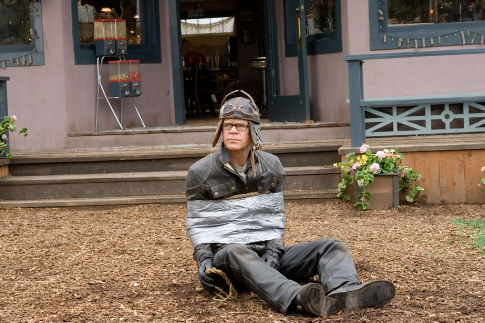 'Wild Hogs' Easily Ride to the Top
March 5, 2007 15:30 PST - By Brandon Gray - Box Office News
After two weeks under the reign of a skeletal biker, four fleshy bikers took charge of the box office, and overall business was up 20 percent from the same frame last year.

Wild Hogs raked in a porky $39.7 million on around 4,100 screens at 3,287 theaters, the third-highest grossing March opening on record behind the Ice Age movies and the biggest start ever for a road trip comedy. Distributor Buena Vista brought home the bacon on the first weekend of March before with the comedies Bringing Down the House in 2003 and The Pacifier in 2005, each opening to over $30 million.

"The tracking services had us at best in the mid-$20 million range," said Chris LeRoy, Buena Vista's senior vice president general sales manager. "We chose this date because of the historical success we had with The Pacifier and Bringing Down the House, and Wild Hogs seemed to fit that mold." Buena Vista's exit polling indicated that 53 percent of Wild Hogs' audience was male and 65 percent was over 25 years old, with age 35 to 49 the top group at 26 percent. The overall grade from moviegoer pollster CinemaScore was "B+."

The premise of four suburban guys going on the road as bikers had broad appeal, and the casting of popular actors John Travolta, Tim Allen, Martin Lawrence and William H. Macy helped put Wild Hogs over the top—the opening was a personal best for both Mr. Travolta and Mr. Allen. Buena Vista cut a fun trailer and aggressively marketed the picture, including a shrewdly-placed spot during the Super Bowl.

{lnk43983}Zodiac{/lnk} hooked $13.4 million on around 3,100 screens at 2,362 sites, which was unimpressive for a serial killer thriller but above par among true crime pictures. It was the first movie in five years from director David Fincher (Panic Room), and represented his smallest start in terms of admissions—for instance, Seven's $13.9 million would equal over $21 million adjusted for ticket price inflation. Distributor Paramount Pictures pitched creepiness in Zodiac's television ads, hampered by vagueness to disguise the fact that the movie itself is more a sprawling drama than a thriller.

Black Snake Moan slithered to a soft $4.1 million at 1,252 theaters, or about half the opening of Hustle and Flow, the previous picture from director Craig Brewer distributed by Paramount's specialty unit. Black Snake Moan, with its tale of a man who chains a girl to his radiator in order to redeem her, was a difficult sell, marred by the marketing's vacillation between drama, comedy and exploitation.

Meanwhile, Ghost Rider's trajectory continued to mirror Daredevil, down 42 percent to $11.6 million for $94.8 million in 17 days.

NOTE: This report was originally written on Sunday, Mar. 4 and was revised on Monday, Mar. 5 with actual grosses.