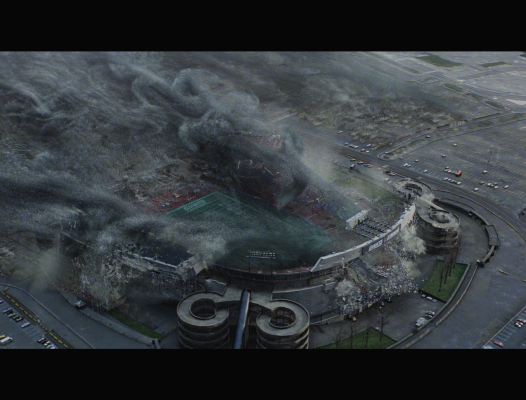 ‘The Day the Earth’ Stalls
December 15, 2008 13:05 PST - By Brandon Gray - Box Office News
This is typically the timeframe where the December box office starts to pick up, but it stalled this year due to a paucity of enticing new releases. The opening of intended event picture, science fiction remake The Day the Earth Stood Still, paled compared to the sci-fi remake that opened on the same weekend last year, I Am Legend, and overall business was down more than 40 percent.

The Day the Earth Stood Still generated a placid $30.5 million on approximately 5,900 screens at 3,560 sites, compared to I Am Legend's $77.2 million last year. The remake of the 1951 sci-fi drama, which distributor 20th Century Fox claimed cost a relatively modest $80 million to produce, also had much less impact than such similar pictures as The Day After Tomorrow, War of the Worlds and Fantastic Four: Rise of the Silver Surfer. Fox's exit polling indicated that 55 percent of the audience was male and 51 percent was over 25 years old.

Included in The Day the Earth Stood Still's numbers were 123 IMAX engagements that accounted for $3.7 million or over 12 percent of the gross. That was the highest IMAX share yet for a two-dimensional title. IMAX, which Fox heavily promoted, claimed 19 of the movie's top 20 grossing theaters. Considering the usual performances for December releases, a month when opening weekends tend to be muted and grosses are spread throughout the week, and the receipts for an IMAX run, where ticket prices run 25 to 40 percent higher than the norm, Day still has the potential to exceed $100 million.

The marketing campaign for The Day the Earth Stood Still eschewed the human drama of the original and focused on the swarming destruction of buildings and trucks, making the picture look like a generic alien invasion or disaster movie. In bold print, ads declared the end of humanity, yet showed no humanity to begin with, such as relatable characters or storylines. Even the famous robot Gort received no play, just fleeting glimpses. The remake's environmentalist propaganda (that man is destroying earth and must stop or be wiped out) was a different message from the original's plea for peace and was obfuscated amidst the special effects chaos, contradicting the contemplative nature of the movie's title. All told, few compelling reasons to see Day were offered to potential moviegoers beyond the vague spectacle and the promise of the new trailer for X-Men Origins: Wolverine.

The other new nationwide releases were negligible. Christmas family gathering comedy Nothing Like the Holidays served up $3.5 million at 1,671, which was a bit better than The Perfect Holiday at the same time last year. Meanwhile, Delgo had by far the worst opening ever for a movie playing at over 2,000 theaters. The computer-animated fantasy scrounged up $511,920 at 2,160 sites, far less than the already record low $916,000 the movie's distributor estimated on Sunday.