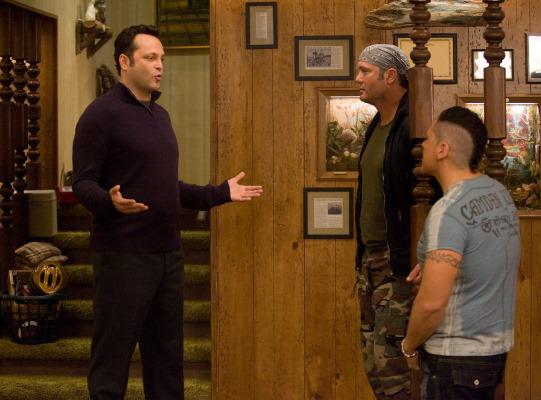 ‘Four Christmases,’ ‘Twilight’ Stay Solid Against ‘Day’
December 15, 2008 13:19 PST - By Brandon Gray - Box Office News
While The Day the Earth Stood Still's uneventful opening contributed to a down weekend overall, several holdovers saw only modest declines. By virtue of its Christmas theme and status as the only broad family comedy in the market, Four Christmases eased 22 percent in its third weekend to $13.1 million. Its tally is a toasty $87.8 million in 19 days.

Continuing its lively run, Twilight fell 39 percent to $8 million in its fourth weekend. Though the drop was steeper than Four Christmases and others, it was healthy for a genre title. Already the highest grossing vampire movie (unadjusted), the picture stands as one of the most popular romantic fantasies in recent memory with $150 million in 24 days.

Bolt dug in its heels after a normal post-Thanksgiving slide last weekend. The computer-animated comedy was off 24 percent to $7.5 million for $88.8 million in 24 days. It held better than Madagascar: Escape 2 Africa, which continued to lose pace versus its predecessor yet still has amassed $169.9 million in 38 days.

Rounding out the Top Five, Australia had an average drop of 41 percent to $4.2 million. The ambitious romantic epic hasn't lingered as strongly as hoped after its modest start, despite a retooled ad campaign that beckoned people to "escape to Australia." The total climbed to $37.8 million in 19 days.

Several high profile pictures debuted in limited release, and they, of course, posted the highest per theater averages, due to their low and specialized theater counts and not necessarily because they are future successes. The drama Doubt collected $507,226 at 15 venues, and Clint Eastwood's Gran Torino bagged $271,720 at six, which was showier than Million Dollar Baby's limited start. Drama The Reader mustered $168,051 at eight, and the four-hour plus biographical picture Che grabbed $61,070 at two (in its Academy Awards-qualifying run that will only last a week). Gran Torino and The Reader have nationwide expansions planned for Jan. 9.

Milk and Slumdog Millionaire again made the Top 12 while still in limited release. Milk rolled out to 328 venues and garnered $2.6 million for a $7.6 million tally through its third weekend, and Slumdog Millionaire drummed up $2.2 million after jumping to 169 sites for an $8 million total through its fifth weekend. Frost/Nixon expanded from three locations last weekend to 39 this weekend and its per-theater average plummeted. The drama grossed $626,377 and is scheduled to reach around 350 theaters on Christmas day, which will be more indicative of its potential.