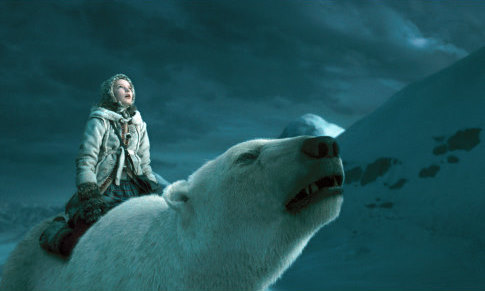 'Golden Compass' Doesn't Get the Lead Out
December 10, 2007 17:08 PST - By Brandon Gray - Box Office News
Not the oasis it was intended to be, The Golden Compass failed to guide the box office out of the desert. A dispirited response to the fantasy adaptation combined with a largely pathetic group of holdovers led to the least attended early December frame in 13 years.

The Golden Compass pointed to $25.8 million on approximately 5,600 screens at 3,528 theaters, which was about average for a live action fantasy. The turnout was well below half that of The Chronicles of Narnia: The Lion, the Witch and the Wardrobe or The Lord of the Rings movies, and the picture was clearly gunning for that league with its reportedly $180 million plus production budget, high screen count and December release date. It was more on par with the less hyped Eragon and Bridge to Terabithia, albeit those pictures had much lower screen counts and more crowded release dates.

Since the phenomenal success of the Harry Potter and Lord of the Rings movies, fantasy has been one of the genre fads in Hollywood and Golden Compass suffered from the resulting glut. In its marketing, the picture looked indistinguishable from all the other fantasy movies and its story wasn't clear and hence was not relatable. Throwing a bunch of computer-generated antics and talking animals on the screen is not enough to garner a sizable audience. What's more, Harry Potter, Lord of the Rings and Narnia are the exceptions in the fantasy genre, which was known for its disappointments prior to their release. Those movies had high interest from the popularity of the books on which they were based, whereas the foundations of Golden Compass and other recent fantasies were not nearly as culturally substantial.

South of The Golden Compass, there was little going on. Weak holdovers drove the overall malaise, though their declines were normal for the time of year. The top movie of the previous two weeks, Enchanted, dipped 35 percent to $10.7 million for $83.9 million in 19 days, but no other picture made more than $5 million over the weekend.

No Country for Old Men again had the slightest drop among wide releases after expanding to 1,324 venues. Down six percent, the crime drama collected $4.1 million for $28.7 million in 31 days. Also seeing a small decline was Fred Claus, because it's a Christmas movie aimed at families. The comedy eased 16 percent to $4.6 million but, with $65.5 million in 31 days, it's still below par versus similar past holiday comedies.