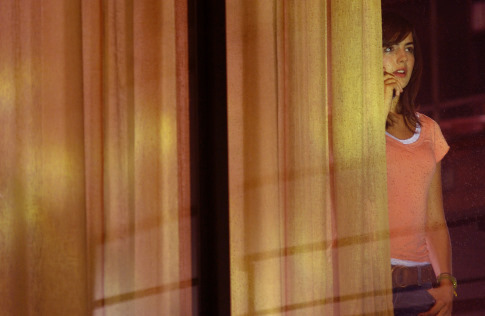 The Super Bowl sacked the Sunday box office with the top 12 pictures averaging a 62 percent drop-off from Saturday, compared to 39 percent last weekend. The big game generally brings a 60 percent hit to business on Sunday.

Gripping the top spot, When a Stranger Calls collected $21.6 million at 2,999 sites, slashing industry expectations that pegged for the mid-to-high teen million range. The $15 million teen horror thriller set a new benchmark for a Super Bowl weekend bow and hit the high end for the genre.

The remake of the 1979 thriller of the same name marks the third consecutive Super Bowl weekend win for distributor Screen Gems, Sony's genre specialty division. Last year, Screen Gems scored a $19 million opening for Boogeyman on this weekend and, in 2004, notched $16.1 million for You've Got Served.

The original When a Stranger Calls grossed $21.4 million in its day. The R-rated thriller's total would equal around $55 million today, adjusted for ticket price inflation. Its PG-13 remake's final tally could reach that level.

Like When a Stranger Calls, victims taunted over the phone has been a compelling gimmick for horror pictures such as Scream and The Ring. What helped Stranger succeed where Sony's last horror remake, The Fog, fizzled was a clear marketing campaign focused on one tormented protagonist, a teen babysitter. A face of horror is among the most enticing elements of the genre's arsenal.

Sony's exit polling indicated that 55 percent of the audience was young and female, and 58 percent was under 21 years old. Given the distributor's teen female target, it's a wonder that the concept wasn't updated to "When a Stranger Text-Messages."

The weekend's other new wide release, Something New, attracted a soft $4.9 million at 1,266 venues. Featuring Sanaa Lathan and Simon Baker, the interracial romantic comedy drew predominantly black and female moviegoers, and about three quarters of the audience was over 25 years old, according to distributor Focus Features' research.

Romantic comedy can flourish on Super Bowl weekend as She's All That, The Wedding Planner and The Wedding Date proved in the past. Something New, though, was patterned as a movie for black audiences, but Focus' last February romantic comedy with similar appeal and release, Deliver Us from Eva, posted better numbers.

"I would have been really happy with $6 million," said Focus' head of distribution, Jack Foley. "Our testing showed that [Something New] was favored very intensely by the African-American community. We did put it out there in suburban situations across the country, hoping it would crossover into other cultural categories, but it was firing on one cylinder [demographically]. I always hoped it could cross over to women everywhere."

Focus also had the leading horse in the Oscar race, Brokeback Mountain. Going into the weekend, though, the group of Best Picture nominees were collectively the least popular with audiences on record, with two barely over $50 million at announcement time last Tuesday—Crash and Brokeback Mountain. It's the second year in a row that the Academy's selections diverged wildly from the public's, and the resulting boost did little to assuage the Oscars' continued wane.

"We've got a lot of runs that have been playing for a month, and some of these markets are over-encumbered," Foley noted of Focus' highest-grossing picture ever. "So there's a weakness in some of these theaters that are playing out. It's a function of normal attrition, despite the Academy awards stuff. It's the core markets that it's important to sustain."

A Best Picture nomination helped Sony Pictures Classics catapult Capote into wide release for the first time. Playing at 1,239 theaters in its 19th weekend, the drama about writer Truman Capote took in a paltry $2.3 million. Under-performing relative to past Oscar pictures, the $7 million production is still hit in the realm of specialty releases, with $18 million in the till.

The final Best Picture nominee in theaters—Crash has been on DVD for five months with no theatrical re-issue scheduled—Munich was even with last weekend, despite an expansion. Steven Spielberg's $70 million drama about the aftermath of the 1972 Munich Olympics' Palestinian terrorist attack pulled $1.7 million from 1,151 theaters for a somber $43 million in 45 days.

Without receiving a Best Picture nomination as many expected, Walk the Line drummed up an eight percent increase over last weekend, making $3.3 million. The $28 million Johnny Cash biographical drama was already a sizable hit without the aid of Oscar, and its total stands at $110.6 million in 80 days.