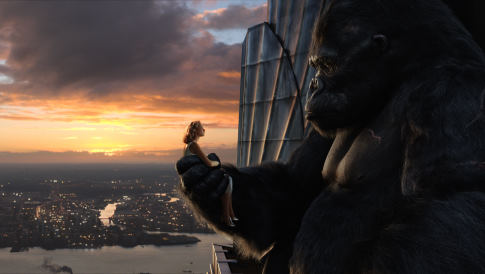 Eight movies entered nationwide release, but King Kong and The Chronicles of Narnia: The Lion, the Witch and the Wardrobe still packed a one-two punch. Kong's second weekend showed some relative weakness by beating Narnia's third weekend by $1.5 million: Kong made $21.3 million (down 58 percent), while Narnia generated $19.8 million (off 38 percent). Fun with Dick and Jane was the biggest new release with $14.4 million, followed by Cheaper by the Dozen 2 at $9.3 million. Memoirs of a Geisha expanded unmemorably to $6.8 million, The Ringer plopped down with $5.2 million, and Munich was unspectacular with $4.2 million (at 532 venues). Three movies had only one day of nationwide play, due to opening on Sunday, Christmas day, and all three were modest: Rumor Has It at $3.5 million, Wolf Creek at $2.8 million and The Producers at $1.6 million. • Weekend Report: 'King Kong' Clings to Christmas Top Spot

Tom Hanks washed into theaters with another blockbuster: Cast Away drew a powerful $39.9 million over the four-day weekend, while What Women Want pulled in $21.6 million in its second weekend (both movie co-starred Helen Hunt). Two other new releases weren't as spectacular as a Cast Away but were popular in their own right: The Family Man earned $15.1 million, while Miss Congeniality bagged $13.9 million. Dracula 2000 was the other new nationwide release, grossing $8.6 million, and a number of high-profile movies debuted in limited release to mixed results, including Finding Forrester, O Brother, Where Art Thou?, Thirteen Days and The Gift. • Weekend Chart

Home Alone spent its sixth weekend atop the box office, earning $15.1 million over the five-day Christmas weekend. In second place, it wasn't a tumor. It was Kindergarten Cop, starting with $11.3 million. It was the second popular comedy from actor Arnold Schwarzenegger and director Ivan Reitman, following Twins. The Godfather Part III played for only one day of the weekend but made enough to rank third. The Francis Ford Coppola picture delivered the highest-grossing Christmas day ever with $6.4 million. Meanwhile, Sean Connery-Michelle Pfeiffer thriller The Russia House disappointed with $4.4 million, but The Bonfire of the Vanities was the infamous disaster. Featuring Tom Hanks, Bruce Willis and Melanie Griffith and directed by Brian De Palma, the Tom Wolfe adaptation grossed $4.2 million. • Weekend Chart

Rocky IV was the champ for the fourth weekend in a row with $8.4 million, while The Jewel of the Nile and Spies Like Us repeated in second and third, respectively. Out of Africa was the major debut, ranking fourth with $3.6 million. 101 Dalmatians (Re-issue) (1985) fetched $2.4 million, and science-fiction drama Enemy Mine mustered only $1.6 million. In limited release, The Color Purple picked up $1.7 million at 192 locations, while Bazil opened at one location. • Weekend Chart