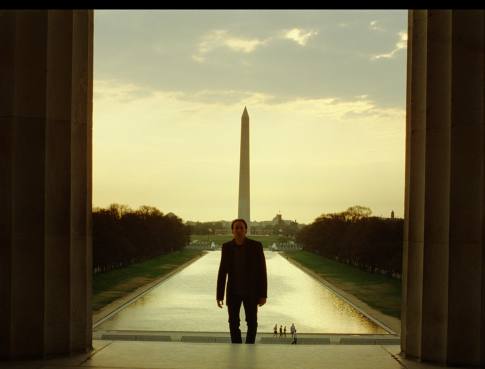 'National Treasure' Leads Christmas Rush
December 24, 2007 16:10 PST - By Brandon Gray - Box Office News
After last weekend's boom, the box office continued to bustle over the Christmas frame, which was among the highest grossing ever. New release National Treasure: Book of Secrets and second weekend holdovers I Am Legend and Alvin and the Chipmunks led the charge, while other pictures were generally subdued.

National Treasure: Book of Secrets dug up an estimated $45.5 million on around 5,800 screens at 3,832 sites, the third biggest Christmas opening weekend on record behind The Lord of the Rings: The Fellowship of the Ring and Meet the Fockers. Walt Disney Pictures' adventure was the only new picture appealing to a broad range of moviegoers, much like last Christmas' Night at the Museum. While the premise of clearing a family's name may not have seemed as exciting as the first movie's historical treasure hunt, Book of Secrets retained the spirit of its predecessor in the marketing, and its strong start was a testament to the goodwill generated by that picture's success, much like the Pirates of the Caribbean franchise. The first Treasure debuted to a surprisingly potent $35.5 million in 2004 and spent three weekends at No. 1, winding up with $173 million by the end of its run.

The rest of the new wide releases were modest at best, though it's important to note that Christmas openings tend to be muted as business is spread across everyday through New Year's. Debuts within this timeframe indicate higher final grosses than comparably-sized starts at other times of the year.

Charlie Wilson's War appropriated an estimated $9.6 million at 2,575 sites, which was less than The Good Shepherd on the same weekend last year. The political comedy was relatively soft compared to similar past movies such as Dave and Primary Colors, especially considering the supposed star power of Tom Hanks and Julia Roberts. One detraction was a poster that, instead of centering on Mr. Hanks and matching the movie's title, obscured the star and made the Philip Seymour Hoffman character the centerpiece.

Another picture with big name talent failed to ignite, though it had relatively more verve than Charlie Wilson's War. The latest pairing of director Tim Burton and actor Johnny Depp, Sweeney Todd: The Demon Barber of Fleet Street, coughed up an estimated $9.4 million at 1,249 theaters, which was a less attended start than their first Christmas collaboration, Edward Scissorhands. Though based on the Stephen Sondheim musical of the same name, the musical looked too much like Depp's recent macabre fare, including Pirates, The Libertine and From Hell among others, to distinguish itself.

P.S. I Love You collected an estimated $6.5 million at 2,454 locations, which was about the same as another Warner Bros. picture about the loss of loved ones, We Are Marshall from last Christmas. Within its sub-genre, P.S. I Love You was par for course.

Walk Hard: The Dewey Cox Story stumbled out of the gate with an estimated $4.1 million at 2,650 venues. Though prominently promoted as being from "the guy who brought you Knocked Up and Superbad," the subject matter of the $35 million comedy, spoofing Walk the Line and other music biographies, was largely incongruous with the audience for those movies. Besides, music pictures, especially about rock stars that aren't real, routinely struggle at the box office, though some find their audience after the fact, like This Is Spinal Tap.

In limited release, Juno and Atonement expanded to around 300 sites each. Juno grossed a solid estimated $3.4 million. The comedy goes nationwide on Christmas day to 998 theaters. Atonement wasn't as flashy with its estimated $2 million.