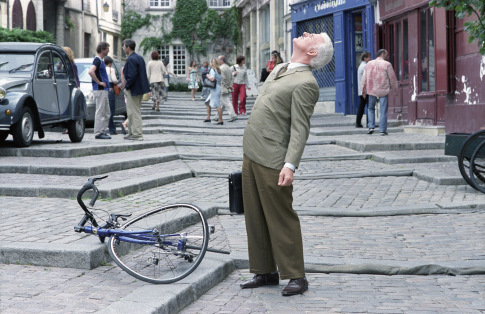 'Pink Panther' Slinks Past 'Destination'
February 13, 2006 14:53 PST - By Brandon Gray - Box Office News
Between Steve Martin attempts to pronounce "hamburger" as French Inspector Clouseau and Death making mincemeat out of its teen victims, the weekend box office came out on par with the comparable frame last year, despite outside competition from the start of the Winter Olympics and major snow storms in the East.

The Pink Panther and Final Destination 3 arrived with solid debuts close to $20 million, and Curious George gave the weekend extra pop by coaxing the most impressive opening relative to industry expectations.

On the down side, Harrison Ford grimaced his way to another disappointment with the generic thriller, Firewall, and the Oscar luster continued to fade for Brokeback Mountain and company.

Among four high profile releases, curiously, there wasn't a romantic picture timed to Valentine's Day. Releasing a romantic comedy at this time of year has proven highly lucrative in the past with such titles as Hitch last year, 50 First Dates in 2004 and How to Lose a Guy in 10 Days in 2003.

With its trusty bumbling detective humor and amusing trailer, The Pink Panther snatched $20.2 million from a super-saturated 3,477 venues. Sony and MGM's $80 million comedy remake broke the curse of the Peter Sellers-less Pink Panthers—the three previous pictures made after the Clouseau originator's death each failed miserably—but whether the franchise thrives enough to merit more movies remains to be seen.

Sony's audience research indicated that The Pink Panther played to the broadest audience of the new releases, which a Sony spokesman credited to older adults' familiarity with the franchise combined with the studio targeting the PG-rated comedy to kids and families. The latter demographic, which Sony defined as children under 12 and their parents, accounted for 51 percent of the audience.

The Pink Panther marks the second MGM movie released by Sony after a Sony-led consortium took over the studio last year—Into the Blue was the first. The long-gestating project stumbled through a variety of release dates, including flinching from an Aug. 5 duel with The Dukes of Hazzard last year, arousing suspicion that trouble was afoot. Sony claimed the move was to allot more time to market and carefully reposition the MGM acquisition.

Like fellow comedians Eddie Murphy and Robin Williams, Mr. Martin has seen family comedy become his main box office fodder, and he's no stranger to remakes. He headlined the popular Cheaper by the Dozen and its under-performing sequel (both directed by Pink Panther's Shawn Levy) as well as the two Father of the Bride's, but floundered with Sgt. Bilko and The Out-of-Towners.

Final Destination 3 skewered $19.2 million at 2,880 theaters, reiterating the consistency of the horror genre. New Line Cinema's gory $25 million sequel opened in the range of recent hits, Hostel and When a Stranger Calls, and notched a franchise high, topping Final Destination 2's $16 million and the first movie's $10 million—they went on to make $47 million and $53.3 million respectively.

"We thought we'd do better than the second one, so we're happy guys," said New Line's president of domestic distribution, David Tuckerman, who cited exit polling showing that the audience was 48 percent under 21 and equally split between genders. Tuckerman pointed to the franchise's "great everyday scares" as the reason for its continued success. "Basically, walking down the street [the Final Destination moviemakers] find everyday ways to kill people," he explained. "When you realize your screwdriver can kill you it's actually more frightening than a monster."

After Hoodwinked and Nanny McPhee whipped up stronger-than-expected numbers, Curious George followed suit, swallowing $14.7 million at 2,566 theaters. The under-$50 million traditionally-animated adaptation of the famous children's books, which early in its development was a candidate for computer animation, was distributor Universal Pictures' first fully-animated release since Balto in 1995.

"We would've been happy with $10 million," said Nikki Rocco, Universal's head of distribution. "We're happy that parents rediscovered the character [Curious George], based on the incredible marketing campaign. If you're a parent, you knew George was coming. You need parents' attention because they're taking the little ones. They're the ones making the decisions."

According to Universal's exit polling, the most prominent demographic was children under nine years old, who comprised 43 percent of the audience, while adults over 25 made up 42 percent. The top reasons children marked off for seeing the picture were "George the monkey," "the books" and "animation," while adults checked "the books," "the story in the marketing materials" and that it was a "family film."

Firewall hacked $13.6 million out of 2,840 sites, a start in the same league as Harrison Ford's previous low-grossing movies, Hollywood Homicide and K-19: The Widowmaker. Adjusted for ticket price inflation, Ford's career opening average for wide releases is around $24 million. Distributor Warner Bros.' research suggested that two thirds of Firewall's audience was over 30, and 53 percent was female.

After gaining little momentum from last week's Oscar nominations, Best Picture contenders all shed screens and collapsed at an alarming rate, implying indifference from moviegoers. Brokeback Mountain held up the best but was still down 33 percent, while Capote, Good Night, and Good Luck. and Munich each tumbled over 40 percent. By comparison, last year's crop fell 17 percent on average at this same point. With a $4 million weekend, Brokeback Mountain has $66.5 million in the till in 66 days, leading the Oscar pack by a wide margin.

NOTE: This report was originally written on Sunday, Feb. 12 and was revised on Monday, Feb. 13 with actual grosses.