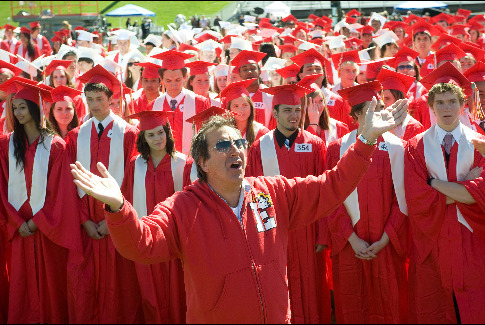 ‘Zack and Miri,’ ‘Changeling’ Contribute to Bleak Halloween
November 2, 2008 23:57 PST - By Brandon Gray - Box Office News
In a particularly weak Halloween weekend, High School Musical 3: Senior Year bled 64 percent yet still held onto the top spot. Halloween landed on a Friday this year and overall attendance was down around 27 percent from the last time that happened in 2003. One has to go back to 1998 to find a worse Halloween weekend.

Unless they capture the zeitgeist with broadly relatable or bar-raising/lowering humor, comedies of Zack and Miri's ilk tend to post modest numbers theatrically but can expand their audience considerably on home video and television. Zack and Miri was too narrow in its subject matter to knock it out of the park like Knocked Up and others. It was further hampered by a television advertising campaign that not only omitted the Make a Porno part of the title but failed to state what was going on, effectively dousing cold water on the humor. It takes more than simply featuring the latest trendy comedy actor, like Seth Rogen, to rise above niche receipts or propel a Kevin Smith-directed movie beyond that $10 million plateau.

Underperforming like Zack and Miri in its nationwide launch, Changeling rang up $9.4 million on around 2,000 screens at 1,850 sites. The Clint Eastwood-directed period drama, for which both grieving mother and fighting-the-system angles were pushed in its marketing, ranks as Angelina Jolie's best start as the top-billed lead in a drama, though it was below par for Eastwood, trailing Mystic River, Flags of Our Fathers and more. Jolie has only shown signs of bankability in action and thriller movies. According to distributor Universal Pictures' exit polling, 68 percent of Changeling's audience was over 30 years old and 61 percent was female.

Also opening, The Haunting of Molly Hartley crept into 2,652 locations and mustered a meager $5.4 million. It was the widest release yet for distributor Freestyle Releasing, though it came in below their own An American Haunting. Meanwhile, RockNRolla was soft in its nationwide expansion. The British crime comedy nabbed $1.9 million at 826 spots.