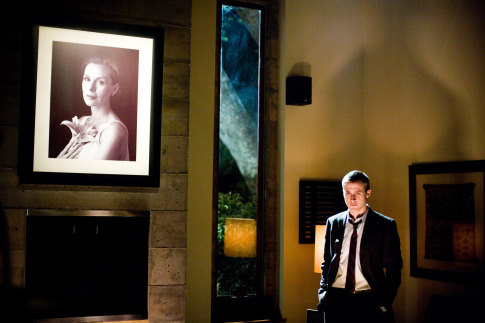 While it held well for a youth-targeted scary movie, Disturbia essentially topped the weekend by default due to an unappealing slate of new releases. The Rear Window-inspired thriller made $13 million, down 41 percent for a $40.2 million tally in 10 days.

Overall weekend business totaled $88.2 million, which was weak for the time of year. It was down 19 percent from the same frame last year when stronger new movies (Silent Hill, The Sentinel) and heftier holdovers (Scary Movie 4, etc.) were in play.

Grossing the most among new releases, Fracture seized $11 million at 2,443 theaters. That was on the low end for a high profile thriller and marked the 14th disappointment in a row from distributor New Line Cinema. The marketing campaign set up a battle of wits between Anthony Hopkins and Ryan Gosling, with ads comprised almost entirely of their close-ups, but was otherwise nondescript, failing to present a compelling case for people to catch the movie in theaters.

Vacancy had more empty seats, checking in with $7.6 million at 2,551 sites. Promoted like another horror torture, the $19 million motel thriller from Sony's Screen Gems debuted in the same range as the failed Hitcher remake earlier this year, despite being positioned like Sony's similar title Identity from April 2003.

Fracture and Vacancy made the same mistake as last weekend's Perfect Stranger by relying on star power to carry the day, yet none featured actors that have consistently demonstrated box office clout. Among them, only Fracture's Mr. Hopkins had shown prior pull in the thriller genre, while Vacancy's Luke Wilson and Kate Beckinsale have never carried hit movies on their own and the successes they've been involved in were different genres.

The weekend's buzz picture, Hot Fuzz, scored the best opening of the new releases, relatively speaking, but didn't bust out beyond the core constituency for its brand of humor. Rogue Pictures' British cop comedy from the team behind Shaun of the Dead pulled in $5.8 million at 825 locations. That was an improvement over Shaun's $3.3 million start at 607 sites and was in line with Super Troopers.

In the Land of Women yielded a scant $4.7 million at 2,155 venues. Warner Bros.' drama was among many theatrically-ignored twentysomething-themed pictures, opening in the same range as last year's The Last Kiss, but it also suffered from a confused marketing message—while the trailer said coming-of-age relationship drama, the poster said steamy romance.

Entering nationwide release, The Hoax was ignored, grossing $1.2 million at 1,069 theaters or less than it did last weekend at 413 theaters. Miramax's $25 million literary con drama has garnered $5.1 million in 17 days.

Among holdovers, Blades of Glory slid past the $100 million threshold on its 24th day of release, while the poorly-established pictures (Perfect Stranger, Pathfinder: Legend of the Ghost Warrior, Grindhouse, Redline, etc.) each lost around two-thirds of their audiences.

NOTE: This report was originally written on Sunday, April 22 and was revised on Monday, April 23 with actual grosses.