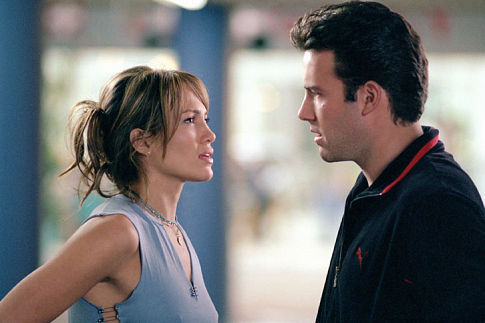 'Grudge' Grabs No. 1
October 25, 2004 0:53 PDT - By Brandon Gray - Box Office News
Sarah Michelle Gellar's haunted movie took to the top of the charts like Scooby to a Scooby snack, while Ben Affleck's Christmas flick merely haunted the actor with memories of Gigli.

The Grudge, starring Gellar, held the top spot with $39.1 million at 3,245 theaters, the third biggest Fall opening ever behind Scary Movie 3's $48.1 million and Shark Tale's $47.6 million. The debut shocked the industry, which expected a little over $20 million at most.

Sony's less-than-$10 million ghost story marks the maiden release of producer Sam Raimi's Ghost House Pictures, and the Spider-Man director's name was prominently featured in the marketing. The ads effectively recalled fellow Japanese horror remake The Ring, including the requisite creepy kid, and capped off with grimy fingers coming out of the back of a showering Gellar's head.

The Grudge's success cements Gellar's scream queen status. Her greatest successes have at least had a horror element, including TV's Buffy the Vampire Slayer, I Know What You Did Last Summer and even the two Scooby-Doo movies. The Grudge is her second best debut after the first Scooby-Doo's $54.2 million.

Breaking the weekend down, The Grudge grabbed $14.6 million on Friday and rose 7% on Saturday, an uncommon boost for a genre picture performing at these levels. On Sunday, it fell 42% to $9.0 million.

Moviegoers skewed teenaged as 52% were under the age of 21, according to Sony's exit polling. Females comprised 55% of the audience. The Grudge was rated "excellent" or "very good" by 80%.

Two years ago, The Ring saw $15.0 million out of the gate at 1,981 theaters, expanded and enjoyed a Halloween spike in business on its way to a $129.1 million total gross. With its super-saturation release and lower general buzz, The Grudge won't be as leggy, but it has an excellent shot at topping $100 million.

The Grudge continues the hot streak of horror remakes. Since The Haunting ignited the trend in 1999, the genre has yielded hit after hit, including The Texas Chainsaw Massacre and Dawn of the Dead, with only one misstep (Willard). Next year will bring such familiar titles as The Amityville Horror and House of Wax.

Grudge's basis, the still-in-theaters Ju-On: The Grudge, has grossed a modest $305,959, never playing at more than 11 venues.

Sony is on a roll with its third genre picture and No. 1 debut in a row to beat industry expectations. The Grudge follows The Forgotten and Resident Evil: Apocalypse, which have thus far grossed $62.0 million and $50.6 million respectively. Sony has a commanding lead in the 2004 market share, having racked up $1.134 billion from its 15 releases (plus six holdovers from 2003).

Surviving Christmas won't be playing in theaters come its titular holiday if its anemic opening is any indication. Spreading the jeer at 2,750 theaters, the Ben Affleck dark comedy mustered just $4.4 million to rank seventh for the weekend. Distributor DreamWorks launched the picture so early relative to Christmas to avoid competition from such stronger upcoming holiday-themed titles as The Polar Express, Christmas with the Kranks and Meet the Fockers.

Dark comedy is a tough sell and has never seen a $100 million plus gross. Last year's $60.1 million success Bad Santa was an exception thanks to clever marketing and relatable humor. Surviving Christmas's performance is more the norm with a bow in line with such other genre entries as Duplex, Death to Smoochy, Lucky Numbers and Envy.

Surviving Christmas stands as Affleck's second worst opening as leading man after Gigli's $3.8 million—the headline- and punchline-making flop that still dogs the actor. His other post-Gigli projects, Paycheck and Jersey Girl, disappointed as well. Due to choices he's made and the bandwagoning media's backlash at his overexposed personal life, he's known as a purveyor of bad movies.