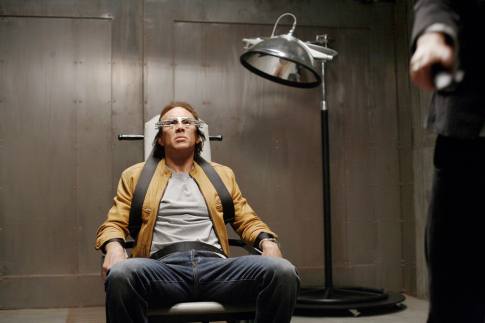 'Disturbia' Tops Idle Weekend
April 30, 2007 16:15 PDT - By Brandon Gray - Box Office News
A weak crop of movies led to a poorly-attended weekend at the box office, even by late April standards. With new movies like Next and The Invisible following last weekend's meager batch (Fracture, Vacancy), it's as if the industry has been biding time until the summer season.

Overall business tallied $77.7 million, the lowest since September and down 24 percent from the same frame last year. It was the least attended end of April weekend in a decade. 2007 as a whole, though, still leads 2006 at the same point by three percent.

The sole bright spot, Disturbia, logged $9 million, the only movie to top the box office for three weekends in a row this year. Down 31 percent, the hit thriller has captured $52.1 million in 17 days.

The Invisible, a supernatural horror mystery from Buena Vista, dug up a paltry $7.7 million at 2,019 sites, significantly less than the studio's comparably-released teen pictures Stay Alive and Stick It last year.

The higher profile Next fared worse, generating $7.1 million at 2,735 locations. Opening to a third of the business of the similarly-themed Deja Vu (which was released on DVD this week), the $70 million action thriller starring Nicolas Cage as a man who can see a few minutes into the future presented a muddled, tired premise and had a marketing campaign that favored cheesy spectacle and the actors' names over clarity or suspense.

Next was originally to be distributed by Sony (last set for Sept. 28), but that studio dumped it in January, and Paramount Pictures subsequently picked it up, slotting it just two and a half months after Cage's last action picture, Ghost Rider.

Holdovers generally dropped less than the previous weekend, with the more firmly established pictures falling in the 30 percent range. Hot Fuzz had the smallest decline among wide releases, retreating 17 percent to $4.9 million—although that's after increasing its theater count by 54 percent to 1,272.

NOTE: This report was originally written on Sunday, April 29 and was revised on Monday, April 30 with actual grosses.