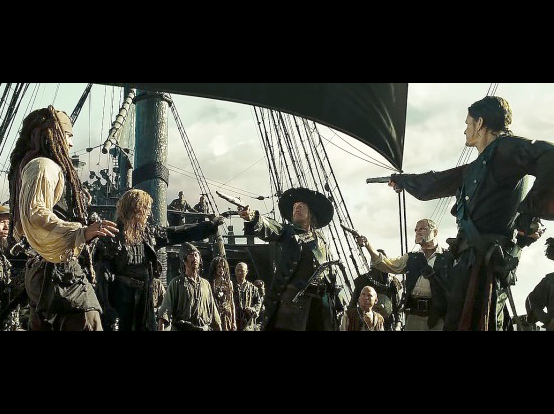 'Pirates' Sinks, 'Knocked Up' Scores
June 4, 2007 14:38 PDT - By Brandon Gray - Box Office News
It was rough sailing for Pirates of the Caribbean: At World's End in its second weekend. The supernatural swashbuckler had one of the steepest post-Memorial Day opening drops on record, falling 61 percent to $44.2 million.

Fending off potent opener Knocked Up to top the box office heap again, At World's End's tally stands at $217.5 million. At the same point, predecessor Pirates of the Caribbean: Dead Man's Chest was down 54 percent to $62.3 million for a $258.4 million total. Earlier in the season, Spider-Man 3 was off a precipitous 62 percent in its second weekend, though it made $58.2 million for the frame and its total was at $240.2 million.

At World's End is on course to fall well short of Dead Man's Chest's $423.3 million by the end of its run, joining Shrek the Third and Spider-Man 3 as hyped sequels in major franchises that failed to live up to their previous movies. These pictures are popular and may be profitable despite massive production and marketing costs but, since they are sequels, a key measure of their success is performance in relation to their predecessors. Significantly lower attendance adds a layer of disappointment.

Knocked Up racked $30.7 million on approximately 3,700 screens at 2,871 theaters. The $30 million comedy was pitched as being from the makers of The 40-Year-Old Virgin and the marketing exhibited the same sense of humor, mixing crudity and pop culture references with a relatable premise. Virgin opened to $21.4 million two summers ago and closed with $109.4 million. Knocked Up has long been pegged a likely hit, shrewdly nestled between special effects onslaughts, and distributor Universal Pictures opened it in the slot of last year's similarly appealing The Break-Up, which debuted to $39.2 million.

Also opening, Mr. Brooks collected $10 million at 2,453 sites. MGM's serial killer thriller started on the low end of the sub-genre's average, though this type of picture has rarely broken out in recent years, and Mr. Brooks was in line with the likes of The Watcher and Twisted.

• 'Pirates of the Caribbean' Special Briefing

NOTE: This report was originally written on Sunday, June 3 and was revised on Monday, June 4 with actual grosses.