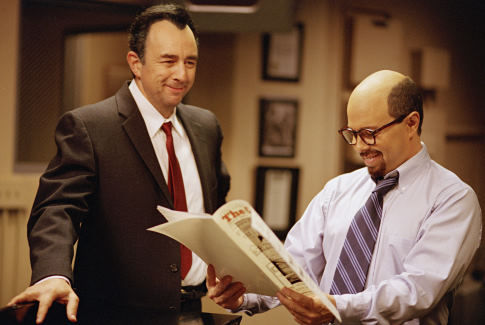 
Ray struck a chord and Saw struck a nerve as The Grudgemaintained its grip on the top spot.

Halloween time was the right time for Ray. The Ray Charles biopic raked in $20.0 million at 2,006 venues. Distributor Universal handily scored the biggest bow ever for a music bio, well ahead of Selena's $11.6 million.

"To think that eight months ago, there wasn't a studio that wanted it," Universal head of distribution Nikki Rocco told Box Office Mojo. "[The opening] supports everything we felt about the movie. It's just amazing. Only to put it in perspective, these kinds of pictures grow but don't open huge."

The story was cited by moviegoers as the main reason to see Ray, followed by the "based on a true story" aspect and star Jamie Foxx, according to Universal's exit polling. Audiences seemed to love the picture as 99% rated it "excellent" or "very good," and about the same amount gave it a "definite recommend" compared to norm of 55%. CinemaScore, a company that does opening night polls, corroborates this, as the picture rated an "A+" across every quadrant.

Demographically, those over the age of 30 comprised 76% of the audience, while females accounted for 62%. Universal said that blacks made up 59% of moviegoers.

Universal screened the picture extensively in advance, kindling buzz around Foxx's portrayal of the late Mr. Charles. Momentum was further built by Mr. Charles' current platinum-selling album Genius Loves Company, a recent tribute concert on CBS and a mass of media appearances. On top of that, Ray's marketing promised not just an enriching, dramatic experience, as biopics often do, but great music and fun, charged with Mr. Charles' signature exuberance.

Ray marks Foxx's first major opening as sole star. The commercial success also bodes well for his Best Actor chances at the Academy Awards. Initially known as a comedian from TV's In Living Color, Foxx was primed for the breakthrough with dramatic performances in Any Given Sunday, Ali and Collateral on his resume.

Universal previously had unlikely success on Halloween with 2001's K-PAX, which debuted to $17.2 million. Ray's distribution pattern is similar to Seabiscuit's, which was a contender at last year's awards derby, though major Oscars failed to materialize. The horse-racing drama earned $20.9 million out of the gate at 1,989 theaters, added venues in subsequent weeks and finished with a leggy $120.3 million. Universal will expand Ray by several hundred theaters next weekend.

Saw buzzed in at third place with $18.3 million at 2,315 locations, sating demand for gruesome R-rated horror like The Texas Chainsaw Massacre did last October. The audience skewed male and 60% was under 25, distributor Lions Gate's exit polling indicated. Like a cross between Se7en's world and Phone Booth's modus operandi, the marketing cashed in on Saw's nightmare set-up of two men chained by the ankles to a serial killer's dank lair and forced to saw off their own limbs in an attempt to survive.

Lions Gate again showed its knack for picking up low-budget, independent horror pictures (Open Water, Cabin Fever, House of 1000 Corpses) and making a profit. Saw could be their most lucrative yet as it delivered the company's second best opening ever, after Fahrenheit 9/11's $23.9 million. It even found a larger audience than the similarly grisly but star-driven and big-budget thriller Taking Lives, which opened to $11.5 million earlier this year.

Birth went the way of such other Nicole Kidman dramas as The Human Stain and Birthday Girl, debuting to a modest $1.7 million at 550 theaters. Other than a slight stir over scenes of Kidman's widow being intimate with a 10-year-old boy she believes is her reincarnated husband, New Line gave the $20 million picture a quiet release.

For the first time since 1999's House on Haunted Hill, a horror picture topped Halloween. The Grudge grossed $21.8 million to hold the No. 1 spot for the second weekend in a row. It fell 43%—a solid hold for a genre in which 50% plus plummets are the norm. By comparison, last October's Scary Movie 3 tumbled 58% in its second frame, while Texas Chainsaw Massacre dropped 48%. The Grudge has amassed $70.7 million in 10 days and should eke past $100 million by the end of its run.

All movies tracking racked up $100.8 million, down 1.6% from $102.4 million on the same frame last year when Scary Movie 3 topped the chart and Brother Bear bowed wide in second.