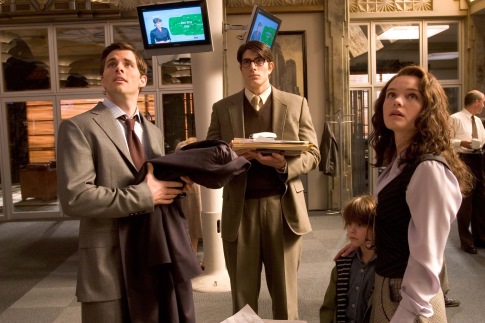 Among distributor Warner Bros.' franchise resurrections, the mega-budget Man of Steel's opening Wednesday flew higher than Batman Begins ($15.1 million) and Terminator 3: Rise of the Machines ($16.5 million, including previews). It has been 19 years since the last Superman picture, while moviegoers waited eight and twelve years respectively for new Batman and Terminator pictures.

"Superman Returns defeated our expectations," said Jeff Goldstein, Warner Bros.' executive vice president and general sales manager. "We were looking at Batman Begins [as a benchmark] and hoping to hit $20 million and we exceeded $20 million." Studio exit polling indicated that 58 percent of the audience was male and that those over and under 25 years old were equally represented.

Superman Returns played on over 8,200 screens across 3,915 theaters, including 76 IMAX locations that generated about $1.2 million of the $21 million gross. Previews were conducted at around 2,500 theaters on Tuesday starting at 10 p.m., which Box Office Mojo estimates accounted for over $3 million of the reported opening day, though Warner Bros. did not reveal that figure. On Friday, the theater count bumps up to 4,065, making it the fourth widest release of all time.

Last year's Independence Day event picture, War of the Worlds, grabbed $21.3 million on its opening Wednesday (sans Tuesday previews), which led to $100.6 million in its first five days. Two years ago, Spider-Man 2 captured the Wednesday record with its $40.4 million debut, culminating in a $152.4 million five-day haul.

NOTE: This report was revised on June 30 with an updated Tuesday night previews estimate.