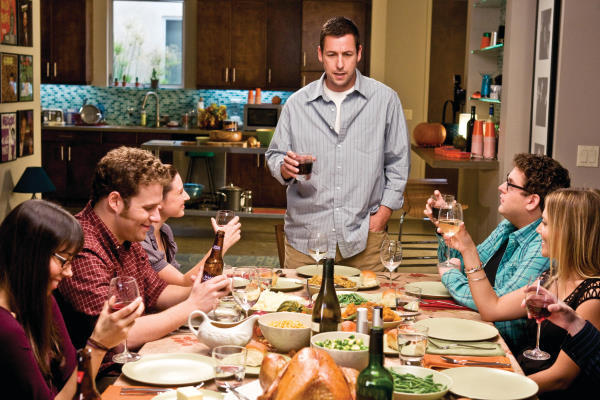 Weekend Report: ‘Funny People’ More Pauper Than King of Comedy
August 3, 2009 15:27 PDT - By Brandon Gray - Box Office News
If this weekend's box office were a comedian, it might have been heckled off the stage, mostly for its dullness. Between the main new release, Funny People, which always had sketchy prospects despite high profile talent, and the cumulative effect of a relatively soft July slate, overall business amounted to $127.6 million, which was off 17 percent from the same weekend last year and low for the time of the year. What's more, the summer as a whole became on par with last summer through the same point, dwindling from the lead it had racked up in May and June.

Headlining the weak weekend, Funny People drew $22.7 million on approximately 4,100 screens at 3,007 sites, which was significantly less than director Judd Apatow's previous picture, Knocked Up, and even behind his first, The 40-Year-Old Virgin, in terms of attendance. By lead actor Adam Sandler's standards, the debut was poor for one of his comedies, which have typically opened in the $30-40 million range, but it was much bigger than his past dramas. Distributor Universal Pictures exit polling indicated that 53 percent of the audience was male (compared to 54 percent female for Virgin) and 52 percent was 25 years of age and older. The grade from opening night moviegoer pollster CinemaScore was a discouraging "B-."

While The 40-Year-Old Virgin and Knocked Up had their share of pop culture references, Funny People came off as an industry navel-gazing exercise in its marketing, and such movies tend to be met with indifference from moviegoers (including past movies about comedians like Punchline and Mr. Saturday Night). Many ads just presented Sandler, Seth Rogen, Jonah Hill and others hanging out and proclaimed them to be "funny people," assuming that their presence alone was enough to excite audiences. If one has to tell the audience that they're funny people (without showing), then they're not funny people. Ultimately, the advertising boiled down to a few pop culture jokes (on Harry Potter, Die Hard, YouTube, etc.), without the relatable storylines and humor of Virgin and Knocked Up.

The two other nationwide releases were negligible. Aliens in the Attic crash landed with $8 million at 3,106 sites, or comparable in its appeal to Space Chimps from last summer. The Collector, presented as another torture horror similar to the Saw movies, nabbed $3.6 million at 1,325 sites, which was better than Captivity, P2 and High Tension.

Among holdovers, Harry Potter and the Half-Blood Prince's third weekend was mitigated by its launch at 166 IMAX sites. The picture held on to second place with $17.9 million, or about as much as the previous movie, Harry Potter and the Order of the Phoenix, in its third weekend. It was down 39 percent, compared Order of the Phoenix's 45 percent, and its total climbed to $255.7 million in 19 days. IMAX accounted for $3.1 million or 18 percent of the weekend gross.

Ice Age: Dawn of the Dinosaurs took in $5.5 million, down 34 percent, and its tally rose to $182.1 million in 33 days, which was more than Ice Age: The Meltdown through the same point despite lower-grossing weekends. On the foreign front is where Dawn of the Dinosaurs has shined, and it hit another milestone. With $548 million in the till, it surpassed Finding Nemo as the highest-grossing animated feature overseas ever.

For the fourth straight weekend, The Hangover had the smallest decline among nationwide releases, easing 20 percent to $5.2 million. With $255.9 million in 59 days, it even eclipsed Star Trek. The Proposal also had another strong hold, off 23 percent to $4.9 million for $149 million in 45 days. The year's top-grossing movie, Transformers: Revenge of the Fallen, held better than its predecessor again despite losing most of its IMAX showings to Harry Potter. The robo-action sequel was down 42 percent to $4.7 million for $388.2 million in 40 days.

In limited release, (500) Days of Summer and The Hurt Locker had major expansions. Well on its way to becoming the top grossing of 2009's modest crop of specialty releases, (500) Days of Summer jumped to 266 sites and packed a solid $2.8 million, while Hurt Locker advanced to 523 sites and mustered a softer $1.9 million. Both pictures' totals stand at around $6.8 million.