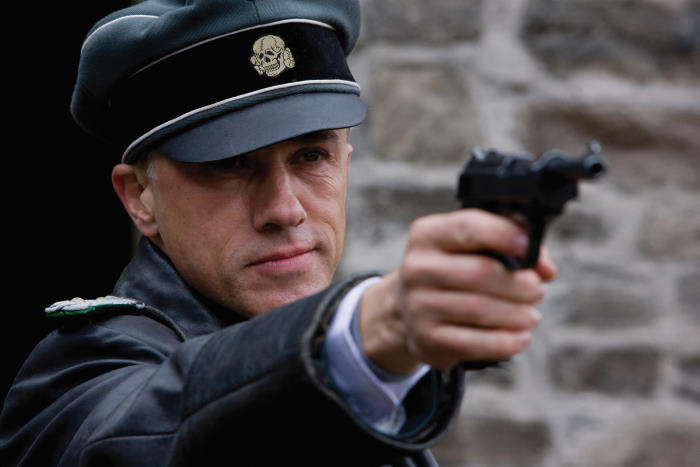 Weekend Report: 'Inglourious Basterds' Scalps the Box Office
August 24, 2009 14:08 PDT - By Brandon Gray - Box Office News
With a smashing debut for Inglourious Basterds, overall business was a-boomin.' The increase over the same weekend last year was around 20 percent, making for one of the busier late August weekends on record.

Storming approximately 4,400 screens at 3,165 sites, Inglourious Basterds ground out $38.1 million, ranking as the highest-grossing opening ever for a movie released in the second half of August (and 11th for the month as a whole). More importantly, among World War 2-themed pictures, only Pearl Harbor and Saving Private Ryan had greater initial attendance, and Basterds more than quadrupled the debut of recent release, Defiance, and exceeded Valkyrie's first three days by 58 percent. Basterds also set a new high for writer-director Quentin Tarantino, surpassing the start of Kill Bill Vol. 2 ($25.1 million) and more than tripling the debut of his last movie, box office disappointment Grindhouse.

Inglourious Basterds succeeded where Grindhouse failed thanks to a focused marketing campaign and more appealing premise: it was clearly presented as a "men on a mission" story a la The Dirty Dozen, Saving Private Ryan and others, and it was centered by bankable leading man Brad Pitt. World War 2 is a popular subject matter for movies (despite the misfires of this decade), and Basterds stood out in its advertising with Tarantino's gruesome and humorous sensibility. It promised to be a blunt, over-the-top picture about "killin' Nazis" (one of Hollywood's favorite bogeymen). Distributor The Weinstein Company's exit polling indicated that 58 percent of the audience was male and 72 percent was aged 25 and older, which was a composition similar to Valkyrie and Tropic Thunder, the top-grossing movie of last August that had a tonal likeness to Basterds.

Aside from Inglourious Basterds, the rest of the new nationwide releases failed, including the latest fantastical kids movie from Tarantino's Grindhouse, Sin City and From Dusk Till Dawn compatriot, Robert Rodriguez. Shorts nabbed a rocky $6.4 million at 3,105 sites, or a fraction of Rodriguez' Spy Kids movies and The Adventures of Sharkboy and Lavagirl in 3D. The debut was on the low end among other like-minded movies as well, with initial attendance slightly higher than Zoom but lower than Kazaam. Post Grad flunked out with $2.7 million at 1,959 sites, which, like Shorts, was well below the norm, while X Games 3D The Movie crashed and burned with $837,216 at 1,399 sites. All three pictures had light promotional campaigns compared to Basterds.

Last weekend's top-grossing movie, District 9, collected $18.2 million in second place, lifting its total to a strong $72.8 million in ten days. Showing some traction, the picture was down 51 percent, which was a relatively modest decline for a genre that typically sees second weekend falls in the 50-70 percent range. Cloverfield and The Day the Earth Stood Still (2008), for instance, each crumbled 68 percent and had significantly lower totals at the same point.

Easing 27 percent, Julie & Julia held firm in its third weekend, packing $8.8 million for a $59.1 million total in 17 days. Much lower on the weekend chart, (500) Days of Summer had the slightest drop among nationwide releases, off 23 percent to $2.3 million for a $22.1 million tally and continuing on a Garden State path. Meanwhile, stalwart The Hangover lost less business than theaters in percentage terms, down 26 percent to $1.5 million. The break-out hit of the summer has amassed $268.3 million in 80 days, or close to the final tally of There's Something About Mary adjusted for ticket price inflation.