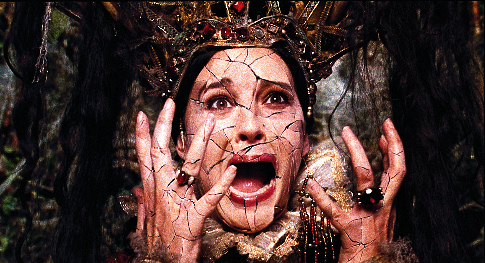 'Virgin,' 'Grimm' Top Glum Weekend
August 29, 2005 14:00 PDT - By Brandon Gray - Box Office News
The Brothers Grimm had a cheerier opening than its tortured history would suggest, and The 40-Year-Old Virgin held firm in first place, but business was dull, even for late August—the comparable frame last year at least had the unlikely success of the martial arts drama, Hero, to stir things up.

Production began more than two years ago, and The Brother Grimm was flogged around the release schedule for over a year. Gilliam—Grimm his first completed feature since Fear and Loathing in Las Vegas in 1998—reportedly had creative conflicts with Miramax heads, Harvey and Bob Weinstein, and Miramax's partner on the picture, MGM, backed out last year.

The Brothers Grimm wasn't treated like the usual late August dumping, despite hitting theaters as part of a release glut (including casualty The Great Raid) from the Disney-owned Miramax before the Weinsteins depart at the end of September. Miramax marketed the picture extensively as a swashbuckling adventure in the vein of Van Helsing and Sleepy Hollow. That's been a consistently appealing angle and found an audience for such recent problem projects as Hidalgo and The League of Extraordinary Gentlemen, but both of those pictures opened to considerably more business than Grimm.

Outside of the Bourne and Ocean's Eleven franchises, the bankabiltiy of The Brothers Grimm's lead actor, Matt Damon, has been shaky, and two of his biggest failures were period pieces, The Legend of Bagger Vance and All the Pretty Horses. Co-lead Heath Ledger has carried one popular movie, A Knight's Tale, and the rest were disappointments. At best, The Brothers Grimm will be filed as a wash on each actor's ledger.

Moviegoers did not abstain from The 40-Year-Old Virgin, which eased 24 percent to $16.3 million. The drop was comparable to Wedding Crashers and better than American Pie in their second weekends. The $26 million sex comedy has bagged $48.6 million in 10 days.

Red Eye gripped audiences again with $10.3 million, climbing to $32.6 million after 10 days. The DreamWorks thriller descended 36 percent, a much stronger second weekend hold than Skeleton Key and Phone Booth had.

The Cave excavated $6.1 million from 2,195 locations, dwelling at the low end of creature feature debuts. The picture marks distributor Sony's sixth miss in a row, although the studio paid a mere $6.5 million for the North American rights. Sony has bowed genre pictures on the fourth weekend in August for three consecutive years now; The Cave following Anacondas: The Hunt for the Blood Orchid in 2004 and The Medallion in 2003.

Opening weekends don't get much worse than Undiscovered's. Lions Gate's romantic music drama stayed true to its title with $676,048 at 1,304 venues, averaging $518 per site. Only seven previous wide releases on record had weaker per theater averages in the past 25 years, and Undiscovered is the poorest performer since National Lampoon's Gold Diggers nearly a year ago. Audiences tend to ignore this kind of picture in theaters, but even the likes of From Justin to Kelly and Glitter made over three times as much.

NOTE: This report was originally published on Sunday, Aug. 28 and was updated on Monday, Aug. 29 with actual grosses.