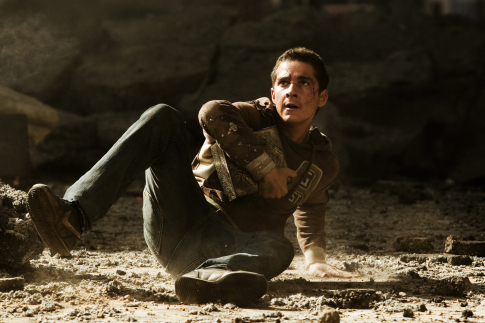 Moviegoers Spark to 'Transformers'
July 9, 2007 15:53 PDT - By Brandon Gray - Box Office News
For Independence Day weekend, Hollywood's latest apocalyptic picture transfixed droves of moviegoers in one of the fastest-grossing starts on record for a non-sequel.

Rolling out on approximately 7,600 screens at 4,011 theaters, Transformers waged $146.6 million in its first six days, not including $8.8 million from Monday night previews which brings the tally to $155.4 million. That was enough to place DreamWorks and Paramount Pictures' $150 million robo-spectacle seventh among the highest-grossing six-day starts of all time, edging out the first Spider-Man as highest among non-sequels. Additionally, Transformers handily scored two minor records: biggest Tuesday daily gross with its $27.9 million opening day and top July 4th gross with Wednesday's $29.1 million.

For the weekend, Transformers racked up $70.5 million, ranking as the second-highest grossing Independence Day opening weekend behind Spider-Man 2's $88.2 million and 23rd best among all movies. The holiday is less about the weekend than it is the full week for major new movies, which often open mid-week and mute their weekend potential.

"Transformers is playing to families as well as all the other segments," said DreamWorks spokesman Marvin Levy. "It was designed for a broad audience, with the initial thought that the first people to see it would overwhelmingly be young males. But right out of the box it has reached a broad audience." In addition to its non-sequel status in a sea of sequels, Levy suggested that the movie's set-up of a boy getting his first car, which later turns out to be a robot, was the relatable entry point that helped lure audiences to the battlebot fantasy.

In recent years, the industry has frequently and successfully associated Independence Day with disaster-themed spectacles from Terminator 2: Judgment Day to Armageddon to War of the Worlds, and Transformers fits that bill. Based on the popular 1980's toy line and cartoon series about robots that change into vehicles and more, DreamWorks and Paramount took a property of limited cinematic appeal—Transformers: The Movie was a theatrical bust in 1986—and sold it as another end-of-the-world event, bolstered by the visceral wonderment of seeing robots morph in live action settings.

Last weekend's top earner, Ratatouille scurried to second place, down 38 percent to $29 million. The rat chef comedy held better than its Pixar predecessor Cars and, with $109.5 million in ten days, it has gained ground on that picture, though it trails the past five Pixar features through the same point.

Live Free or Die Hard retreated a standard 47 percent to $17.7 million for $84.4 million in 12 days. The action sequel will climb past $100 million, like Die Hard: With a Vengeance and Die Hard 2: Die Harder, though it will likely be the least-attended Die Hard by its close.

Sicko expanded into wide release, hitting 702 theaters, but business was down 20 percent to $3.6 million. Michael Moore's political documentary has grossed $11.5 million. It will struggle to match Bowling for Columbine's $21.6 million final tally, which was the stated goal of Sicko's makers in a bid to lower expectations after the sensational success of Moore's last movie, Fahrenheit 9/11.

Meanwhile, Pirates of the Caribbean: At World's End became the third picture of the year to cross the $300 million mark, following Spider-Man 3 and Shrek the Third. The supernatural swashbuckler reached the milestone on its 44th day of release, a feat its predecessor, Dead Man's Chest, achieved in 16 days.

NOTE: This report was originally written on Sunday, July 8 and was revised on Monday, July 9 with actual grosses.