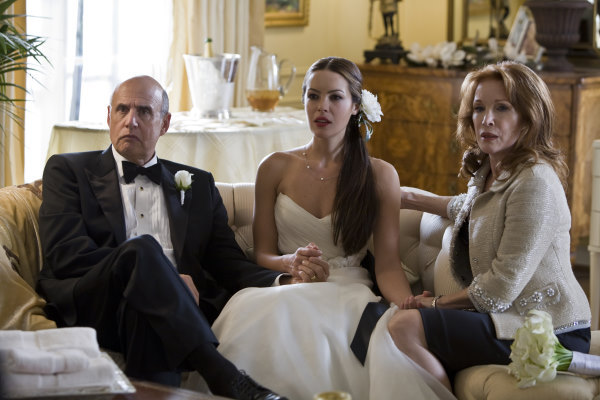 Weekend Report: ‘Hangover’ Gets High, ‘Up’ Hangs On
June 8, 2009 14:43 PDT - By Brandon Gray - Box Office News
The Hangover hit the jackpot over the weekend, narrowly edging out Up for the top spot. The ribald comedy had been projected to trail the Pixar adventure in Sunday's studio estimates, but was revised upward once actual grosses poured in. Hangover's Friday dominance combined with a better-than-expected Sunday haul cinched its position, despite Up soaring past it on Saturday as well as being marginally ahead on Sunday. Both pictures were highly successful for their genres and wound up less than two percent apart. Less fortunate was Land of the Lost, which debuted at a distant third. The weekend as a whole came in at $165.5 million, off six percent from the same period last year when Kung Fu Panda opened.

The Hangover packed a much greater wallop than the norm for its genre, taking in $45 million on around 4,500 screens at 3,269 sites. It was hyped as the preordained raunchy comedy hit of the season, and it exceeded that expectation, opening higher than Wedding Crashers even when adjusted for ticket price inflation. In the spirit of Wedding Crashers, Old School, Harold and Kumar and Dude, Where's My Car?, the marketing portrayed a relatable yet over-the-top premise of three friends waking up in the bizarre aftermath of a Las Vegas bachelor party that they don't remember. Driving the comedy was the mystery of what happened to them and the whereabouts of the groom. Distributor Warner Bros.' research suggested that 52 percent of the audience was male and 53 percent was under 25 years old.

Deflating 35 percent, Up picked up an excellent $44.1 million on approximately 6,700 screens at 3,818 sites, inflating its total to $137.2 million in ten days. Its drop was quite small for a movie performing at blockbuster levels, and it held nearly as well as Finding Nemo at the same point and much better than WALL-E and Cars among past Pixar summer releases. Its 3D run at 1,537 venues accounted for $23 million of its weekend gross and $73.5 million of its total.

While The Hangover smashed, Land of the Lost crashed. Featuring Will Ferrell, the adventure comedy based on the 1970s television series of the same name stumbled out of the gate $18.8 million on approximately 4,800 screens at 3,521 locations. The start was lower than the similar Journey to the Center of the Earth from last summer as well as Ferrell's last TV adaptation, Bewitched, though it was a bit higher than Speed Racer. Distributor Universal Pictures' exit polling indicated that 51 percent of Land's audience was 25 years and older, and, of that group, 40 percent were parents of at least one child under 13 and the "non-child" audience (13 plus) was evenly split between genders.

In its advertising campaign, Land of the Lost awkwardly straddled the line between comedy and adventure and between family and adult appeal. Ferrell has little cachet in the family genre, given his track record after Elf, and he seemed to simply offer his typical shtick. Since Land of the Lost is not well known today and science fiction-oriented comedy is a tough sell, the movie had questionable commercial potential from the outset, and it lacked a built-in audience or a context for its intentionally cheesy production values. Neither here nor there, the picture further paled compared to the Up juggernaut, which had both comedy and adventure clearly on tap for the entire family.

Among nationwide holdovers, Star Trek saw the smallest slide, down 34 percent to $8.3 million. Logging $222.7 million in 31 days ($21.2 million of which from IMAX runs), it flew past Star Trek II: The Wrath of Khan to become the second-biggest movie of the Star Trek franchise adjusted for ticket price inflation, and it has set a course for the top spot currently held by the first movie, Star Trek: The Motion Picture.

Also opening nationwide, My Life in Ruins brought in a modest $3.2 million at 1,164 sites. Featuring Nia Vardalos, creator of My Big Fat Greek Wedding, the debut was slightly less attended than the start of her last picture, Connie and Carla.

Overseas, it was a different story as Terminator Salvation dominated in its major foreign rollout. Playing in 70 markets, the sci-fi action picture drew $65.2 million (including previews), lifting its total to $99.1 million and out-pacing Terminator 3 in comparable markets by close to 20 percent through the same point. The Night at the Museum sequel was second with $27.9 million ($149.6 million total), followed by Angels & Demons, which mustered $22.1 million and stands as 2009's top-grossing picture internationally at $291 million.

• 'Up' Lifts Pixar to Tenth Smash