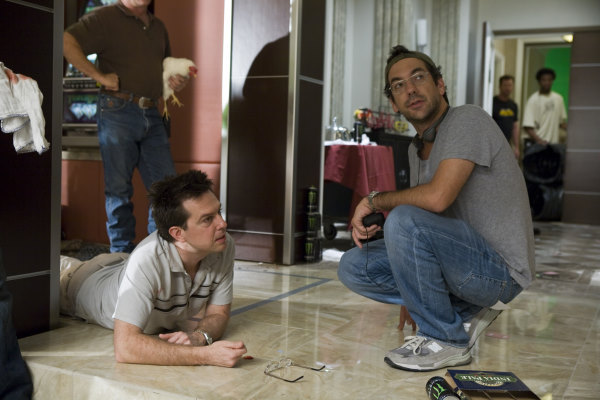 Weekend Report: Lush ‘Hangover,’ ‘Up’ Linger Over Typical ‘Taking’
June 15, 2009 14:16 PDT - By Brandon Gray - Box Office News
The good times continued to roll for The Hangover and Up, though not so much for the new movies and the box office as a whole. Hangover kept its buzz going with $32.8 million, while Up maintained its slow descent with $30.8 million. While those pictures were bustling, overall business was down 24 percent from the same weekend last year and had the lowest attendance for the timeframe in over a decade.

Imbibing an exceptional $104.8 million in ten days, The Hangover saw the smallest dip among nationwide releases, down 27 percent. The ribald comedy held better than Knocked Up at the same point, but not quite as well as Wedding Crashers. Regardless of the percentage drops, though, it's grossed significantly more than those pictures at the ten-day mark, even when adjusted for ticket price inflation, and has flown way above genre norms.

Up eased 30 percent and its tally climbed to $187.4 million in 17 days, the third-highest total of the year behind Star Trek and Monsters Vs. Aliens. The Pixar comedy adventure's third weekend fall was less than Finding Nemo's. Like past weekends, 52 percent of Up's gross was generated from 3D showings. Counting towards Up's Saturday gross were sneak previews for The Proposal from the same distributor, Walt Disney Pictures. On Saturday night, the romantic comedy showed in 817 auditoriums with an average seat count of around 300, and it played to 89 percent capacity.

Neither speeding nor stalling, The Taking of Pelham 1 2 3 claimed $23.4 million on approximately 4,400 screens at 3,074 sites. The remake of the 1974 thriller of the same name posted a slightly below average opening for a Denzel Washington thriller, delivering fewer viewers out of the gate than Man on Fire and John Q. among others, and its attendance was on par with co-star John Travolta's Swordfish. In its marketing, Taking appeared to have a typical hostage thriller plot, distinguished mostly by its dueling lead actors. Hence, its typical debut as there wasn't a compelling reason to see it in theaters beyond moviegoers' fondness for the stars or the genre. Distributor Sony Pictures' research indicated that 54 percent of Taking's audience was male and 62 percent was over 30 years old.

The weekend's other new nationwide release, Imagine That, sparked little interest, opening to $5.5 million on around 3,200 screens at 3,008 sites. That was about the same as the last Eddie Murphy family comedy, Meet Dave. The picture was in the same vein as Bedtime Stories and other fantastical family comedies, but lacked a tantalizing premise in its low key, generic advertising. A father receiving stock tips from his daughter's imaginary friends just didn't cut it, especially in a market with more spectacular family fare like Up and Night at the Museum: Battle of the Smithsonian.

Another disappointment aimed at families, Land of the Lost plummeted 52 percent to $9 million for $34.8 million in ten days. Scheduled as the third family comedy adventure in a row after the Night at the Museum sequel and Up, only with some ads pushing adult humor among other failings, Land failed to gain traction. The Night at the Museum sequel pulled ahead with $9.6 million, off 34 percent for $143.5 million in 24 days.

Meanwhile, Star Trek had another solid hold, retreating 34 percent to $5.5 million for a $231.9 million tally in 38 days, and Terminator Salvation and Angels & Demons remained the weakest of their franchises but held better than their predecessors.