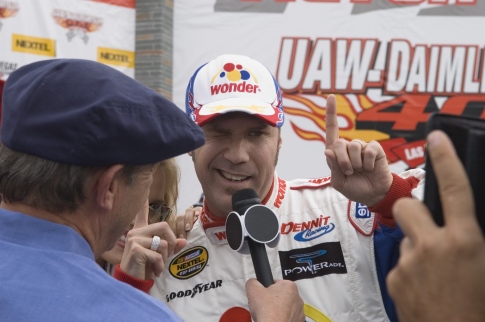 'Step Up' Stands Out, 'World Trade Center' Sturdy in Third
August 14, 2006 14:09 PDT - By Brandon Gray - Box Office News
Talladega Nights: The Ballad of Ricky Bobby took the lead again, but Step Up stood out with an unexpectedly potent opening that transcended the solid debut of the weekend's most high profile release, World Trade Center.

Mixing ballet and hip-hop moves, Step Up brought in a lively $20.7 million at 2,467 theaters. Buena Vista's $12 million dance picture delivered the sub-genre's highest-grossing start since the similarly-themed Save the Last Dance in 2001 and showed a considerable improvement on the previous mash-up, Take the Lead, which disappointed this past spring.

"It so outperformed everyone's expectations," said Chuck Viane, Buena Vista's president of distribution. "I believe that low teens [$ millions] is where everyone thought we would be, and we were hoping for the mid-teens. I think it's just so difficult in the world of pre-opening tracking to know what the teen audience is going to do."

According to Buena Vista's exit polling, 70 percent of Step Up's audience was female and 72 percent were under 25 years old—the under 18 segment alone accounted for 47 percent. Moviegoers polled by CinemaScore gave the picture an "A-" on average.

Though the audience may seem unpredictable, teen girl pictures like Step Up frequently out-perform expectations to the extent that their success is not surprising, but what separates a Step Up from a Take the Lead? For one, Step Up was a romance focused on two characters, compared to Take the Lead's anonymous ensemble. It also followed the basic but perennially appealing formula of the good girl falling for the boy from the wrong side of the tracks (played by rising actor Channing Tatum).

Meanwhile, the second major motion picture set amidst the Sept. 11, 2001, Islamic terrorist attack on America, World Trade Center, eschewed the real-time, docudrama style of the first, United 93, for a conventionally sentimental approach reminiscent of Ladder 49. The result was an $18.7 million weekend at 2,957 locations, for a $26.5 million tally since Wednesday, versus United 93's $11.5 million start last spring.

"This is at the top end of what our expectations were [for World Trade Center]," said Jim Tharp, Paramount's president of distribution. "I think adults go to the movies in the summer time as well if you have movies that look compelling to them." Paramount's research indicated that 65 percent of the audience was over 25 and 55 percent was female, and moviegoers gave the picture an "A-" overall in CinemaScore.

Paramount pitched World Trade Center as a cathartic feel-good event, brushing aside the evil and the loss of 9/11 for how that dark day brought people together. The $65 million picture was distinct in a market catering to the young, but Paramount targeted them as well with ads set to modern rock music and the tagline: "Every generation has a defining moment. This was ours." News of England's thwarted Islamic terrorist threat on Thursday had no noticeable effect on business, which was expected given how the movie isn't really about terrorism.

Also opening, the Weinstein Company's teen horror picture Pulse was a mere ripple with $8.2 million at 2,323 sites, or about half of what The Skeleton Key did on this weekend last year.

Claiming the checkered flag, Talladega Nights lapped up $22.1 million in its second frame. Its 53 percent drop was slightly steeper than star Will Ferrell's Anchorman: The Legend of Ron Burgundy, but Talladega's $90.3 million in 10 days has already raced past Anchorman's $85.3 million final gross.

In limited release, Fox Searchlight's Little Miss Sunshine continued to out-pace the distributor's previous hit dark comedies, Sideways, Garden State and Thank You for Smoking. Sunshine drew $2.6 million at 153 locations in its third outing, averaging $17,014 per site. With momentum on its side, Searchlight plans to roll the picture out to over 600 theaters on Aug. 18 and then to over 1,500 on Aug. 25.

As a whole, weekend business saw a five percent improvement from the same frame last year when Four Brothers muscled into the top spot.

• Movies About or Featuring Terrorism

NOTE: This report was originally written on Sunday, Aug. 13 and was revised on Monday, Aug. 14 with actual grosses.