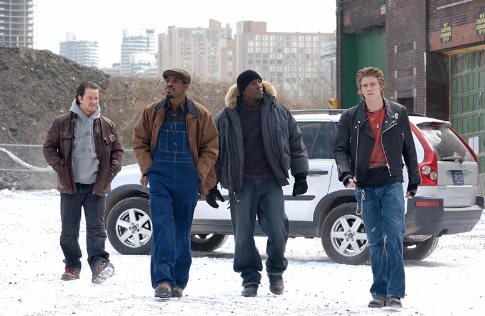 Revenge drama Four Brothers dished out $21.2 million at 2,533 locations, coming in at the high end of distributor Paramount Pictures' expectations. The urban remake of the 1965 John Wayne Western, The Sons of Katie Elder, cost over $40 million to make.

"The cast of the picture [Mark Wahlberg, Tyrese, Andre Benjamin, Garrett Hedlund] was the appeal, and the message that it was about a family seeking revenge for the mother that was murdered," Paramount's head of distribution, Wayne Lewellen, described Four Brothers' attraction. "The marketing campaign delivered the message pretty clearly. Urban action films have done very well in the summer, and the date on the picture was just right."

Four Brothers stood out in the market as a gritty action picture, employing those old genre stalwarts, revenge and camaraderie. Mark Wahlberg and Paramount scored together before with The Italian Job, another action picture about an ensemble coming together to deliver a bad guy's comeuppance.

The Skeleton Key unlocked $16.1 million from 2,771 theaters. In distributor Universal Pictures' research, "scariness" and "suspense" were tied as the top cited reasons people saw the picture, followed by "story" and star Kate Hudson. The supernatural thriller was produced for $43 million.

"It's a little better than expectations," said Universal's head of distribution, Nikki Rocco. "The two movies we were comparing it to were The Ring and The Others, and its opening [weekend gross] was higher."

The marketing campaign took a page from Universal's horror hit, White Noise. Like that picture, Skeleton Key's trailer started with a description of the phenomena and included an eerie audio recording. The picture avoided the fate of Dark Water, the summer's other woman-in-jeopardy supernatural thriller, with better timing and a livelier voodoo theme and setting.

Deuce Bigalow: European Gigolo limped to $9.6 million at 3,127 locations. The Rob Schneider comedy performed below industry predictions, but it was relatively cheap to produce with its $22 million budget—$5 million more than Deuce Bigalow: Male Gigolo.

{file:exitpolling-050814.htm}The first Deuce Bigalow racked up $12.2 million at 2,154 theaters on its opening weekend nearly six years ago and went on to gross $65.5 million. It was successful enough to give producers an excuse for a sequel, but European Gigolo was simply a retread when the novelty had long worn off. There was truth in advertising, though, with the tagline, "Same Ho, New Lo."

The Great Raid gathered a modest $3.4 million at 819 sites. Shot in 2002, the $80 million World War II drama bounced on and off the release schedule numerous times for the past two years. It finally saw the light of day as part of distributor Miramax's inventory clearance before the founders, the Weinstein brothers, leave the company at the end of September.

The Dukes of Hazzard came to a screeching halt in its second weekend, falling 58 percent to $13 million for a 10-day haul of $57.5 million. The good times kept rolling for Wedding Crashers, though, which dipped 26 percent to $11.8 million for a $163.9 million tally after 31 days. March of the Penguins had more to flap about, enjoying the strongest hold of all wide releases. The French-made nature documentary was down four percent to $6.8 million at 2,063 theaters. The total stands at $37.7 million in 52 days.

NOTE: This report was originally published on Sunday, Aug. 14 and was updated on Monday, Aug. 15 with actual grosses.