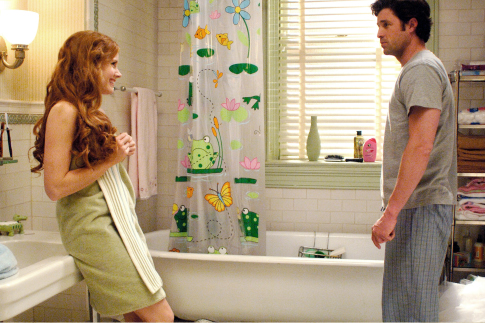 'Enchanted' Tops Slow Weekend
December 3, 2007 1:22 PST - By Brandon Gray - Box Office News
The weekend after Thanksgiving is traditionally a time for leftovers at the box office, and this year was no exception, with Enchanted leading the way. Promising movies rarely launch nationwide at this time, since business dips from the inflated holiday, and this weekend's sole major new release, Awake, was anemic. Couple that with already tepid holdovers and this post-Thanksgiving frame was the least attended in a decade.

Awake opened to $5.9 million at 2,002 theaters, which was low for a thriller. In the ad campaign, actor Hayden Christensen appeared to be the lead, yet Jessica Alba was billed first and was more prominent on the poster, though her character came off as secondary. This distracted from a clear and enticing depiction of the picture's premise of a man (Christensen) who finds himself awake but paralyzed during surgery.

Meanwhile, holdovers took normal 45 to 65 percent hits for the most part, though No Country for Old Men had the smallest fall among wide releases. Down 44 percent, the crime drama snared $4.4 million, bringing its total to $22.9 million. Another crime drama, Before the Devil Knows Your Dead, continued to do relatively decent business for an independent limited release, down 18 percent to $767,087 at 302 sites for $4.5 million in 38 days.

NOTE: This report was originally written on Sunday, Dec. 2 and was revised on Monday, Dec. 3 with actual grosses.