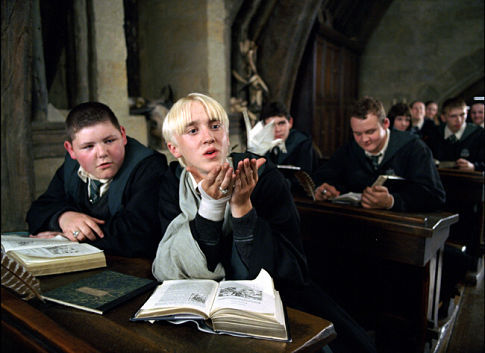 When a picture opens this enormously, a raft of records can be scrounged up—in some trade ads, distributor Warner Bros. was touting it as the "top ranked Friday-opening PG movie in motion picture history!"—even if it's not necessary to convey success. Two other milestones, though, are important to note.

Prisoner of Azkaban also delivered the biggest opening for a third movie in a series, eclipsing Austin Powers in Goldmember's $73.1 million. Though several third movies have out-grossed their predecessors (Spy Kids, Scary Movie, Lord of the Rings), it's still a rarity for a franchise to have such longevity and resiliency. Chris Columbus stepped down as Harry Potter's director and was replaced by . Warner Bros. has had success in the past with such a creative change on the third entry in a signature franchise. Joel Schumacher took over the reins of Batman from Tim Burton and the result, Batman Forever, scored the top bow of the series, and its final tally of $184.0 million beat Batman Returns's $162.8 million.

Most successful sequels bow at the same time of year as their predecessor, but Warner Bros.' shook things up by shifting Harry from his usual November home to June—the seasonal change coinciding with Prisoner of Azkaban's director and tonal changes. That decision was made before Pixar landed its greatest success by straying from its standard November release to post-Memorial Day summer with last year's Finding Nemo.

Continuing the Potter franchise's overseas potency, Prisoner of Azkaban raked in $113.5 million on 7,885 screens in 24 countries as well, marking the third biggest international debut ever behind The Lord of the Rings: The Return of the King's $125.9 million (28 markets) and The Matrix Revolutions's $119 million (109 markets). By comparison, The Day After Tomorrow mustered $85.4 million from 100 countries in its overseas opening last week. Sorcerer's Stone and Chamber of Secrets respectively grossed $658.9 million and $614.7 million in their international runs. Click here for more on Prisoner of Azkaban's overseas grosses.

Some box office controversy erupted during the weekend when most in the industry estimated Prisoner of Azkaban's opening day to be north of $40 million, breaking Spider-Man's $39.4 million record. That over-estimate on Saturday naturally led most to think Spidey's $114.8 million opening weekend record was going down as well. In a rare instance of significant estimating and projecting inaccuracy, many of the theaters in the upper range of Prisoner's 3,855 count turned out to be relatively weaker than most super-saturation releases like Shrek 2 and Finding Nemo, and there was a surprising drop on Saturday. On Sunday morning, some rival studios even had Prisoner pegged at over $100 million.

Breaking the weekend down, Prisoner of Azkaban pulled in $38.3 million on Friday and then fell 17.7% on Saturday to $31.5 million. By comparison, Sorcerer's Stone and Chamber of Secrets rose 3.6% and 15.5% respectively on their first Saturdays, although they opened in November when kids were still in school enabling a greater Saturday bump. Prisoner eased 24% on Sunday to $23.9 million.

In recent weeks, concern was expressed in the media that the marketing wasn't as intense as Potters past and that the young fans may have out-grown the franchise. What was forgotten was Potter's broad-based support among young and old and its thematic universality and literary basis that transcended a mere fad like a Pokemon—kids are growing up along with Harry, Ron and Hermione, while books are being passed down to create new fans.

The demographics bear this out. Prisoner of Azkaban's audience was 60% under the age of 17, according to studio research. That indicates fans are aging with the franchise—released 19 months ago, 60% of Chamber of Secrets's opening moviegoers were under the age of 15. Warner Bros. noted that there was a higher rate of teens and non-family adults—90% of this group rating the picture "excellent" or "very good." Like the previous Potters, Prisoner's gender split skewed slightly female (52%).

As powerful as Potter is, he's no match for the juggernaut that is Shrek 2. DreamWorks' fractured fairy tale soared past $300 million faster than Spider-Man and is on its way to over $400 million and a coronation as the No. 1 movie of 2004. With kids free to see it on weekdays and the inherent frontloadedness of fan favorites, Prisoner of Azkaban will likely drop over 50% in its second weekend, and the most it can hope for is No. 2 for the summer. But even then some might say beware Potter. Something webbed this way comes.

DAILY SHOWDOWN: 'Harry Potter' vs. Himself