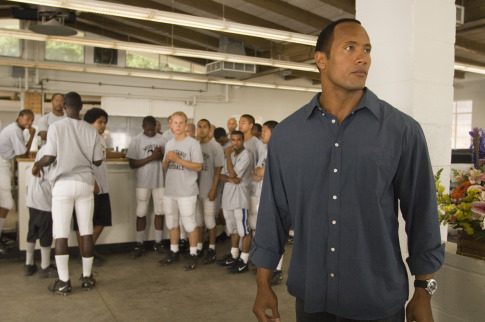 'Gridiron Gang' Tops Flabby Weekend
September 18, 2006 14:50 PDT - By Brandon Gray - Box Office News
Though improving on last weekend's dreariness, the box office continued on its pallid way. Gridiron Gang didn't break out, and The Black Dahlia failed to meet industry expectations, while Everyone's Hero and The Last Kiss were predictably anemic. As inconsequential as the new releases were, they all landed in the top five for the weekend, which was down nine percent from the same frame last year.

Leading the pack, Gridiron Gang banged out $14.4 million at 3,504 venues, marking distributor Sony's 10th No. 1 debut of the year. That's a record, although the studio has released more movies than any other—18 wide releases compared to 12 through the same point last year. Sony's exit polling indicated that 52 percent of Gang's audience was male and 55 percent was under 25 years old.

Coach Carter it wasn't, but Gridiron Gang was on par with Sony's last football drama, Radio, though below average for the sub-genre. The inspirational sports movie is in relatively high supply, including the recent Invincible, and, in its marketing, Gridiron Gang looked like a Remember the Titans or Friday Night Lights copy, only with less distinction and lower stakes.

The $30 million Gridiron Gang was star Dwayne Johnson's third vehicle in a row to open in the $14 million to $16 million range, after Walking Tall and Doom. The Rock is consistent out of the gate, but he has yet to headline a big hit and his appeal has not grown.

Unlike Hollywoodland, The Black Dahlia's marketing campaign wisely focused more on the murder and the mystery than the Hollywood theme. However, after the grisly set-up, the ads dwelt on the characters' obsession rather than the investigation, suggesting little of what the story was beyond the luridness. Thrillers thrive commercially on plot detail, not simply on style.

The umpteenth computer-generated family feature, Everyone's Hero, bagged a soft $6.1 million at 2,896 theaters. The picture was non-descript in an array of similar movies this year and, with its talking baseball and bat, had little draw beyond tykes.

Few puckered up for The Last Kiss, Paramount Pictures and DreamWorks' remake of Italy's local smash hit of the same name. The $20 million romantic comedy-drama aroused $4.6 million at 1,357 sites. Promotions trumped up the presence of actor Zach Braff, coming off the modest success of Garden State two years ago. The Last Kiss appeared to serve up the same coming-of-age angst but without the humor, arresting music or eye-catching visuals that Garden State had in its ads. What's more, movies about navel-gazing young adults rarely spark much interest theatrically.

Among holdovers, The Illusionist again had the smallest drop, easing 20 percent to $3.6 million. Yari Film Group's period mystery has pulled in a potent $23.1 million in 31 days. Summer's other platform hit, Little Miss Sunshine, declined 22 percent and its gross climbed to $46.4 million in 54 days, making it distributor Fox Searchlight's second-highest grossing picture, inching past The Full Monty but still well below Sideways. (Adjusted for ticket price inflation, however, Full Monty would equal $65 million today.)

NOTE: This report was originally written on Sunday, Sept. 17 and was revised on Monday, Sept. 18 with actual grosses.