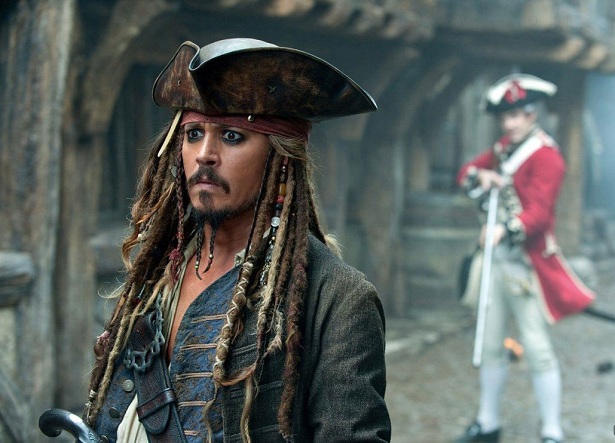 Weekend Report: 'Pirates' Rides Smaller 'Tides'
May 23, 2011 14:14 PDT - By Brandon Gray - Box Office News
Pirates of the Caribbean: On Stranger Tides swooped in with the top-grossing weekend of the year so far. The supernatural swashbuckler claimed $90.2 million at 4,155 locations, edging out Fast Five's $86.2 million launch. That was also the 12th highest-grossing May opening ever, but, since 46 percent of On Stranger Tides' gross was from 3D presentations at a record 2,747 locations (including 256 IMAX 3D venues that contributed nine percent of the gross) and due to today's general ticket prices, its estimated attendance level would rank 27th.

Relative to its predecessors, Pirates of the Caribbean: On Stranger Tides sank: At World's End drew $114.7 million on its first weekend in May 2007 (not including $13.2 million in Thursday night previews), while Dead Man's Chest raked in a then-record $135.6 million opening weekend back in July 2006. Adjusted for ticket price inflation, those grosses would be the equivalent of $131 million and $163 million, respectively. Since the first Pirates of the Caribbean movie was the franchise establisher, its early grosses were in a lower league, though still bustling ($70.6 million in its five-day launch, or $92 million adjusted). On Stranger Tides's start was also less than that of the last Johnny Depp spectacle Alice in Wonderland (2010), which began with $116.1 million.

On the plus side, Pirates of the Caribbean: On Stranger Tides' opening held better relative to its predecessor than Shrek Forever After's did on the same weekend last year. On Stranger Tides was always destined to debut lower than At World's End and Dead Man's Chest, given the mixed reaction to those movies and how the audience lost interest with At World's End. Sealing the deal was On Stranger Tides' lower key approach: it came off as just another Pirates movie in its marketing and lacked stand-out visual and character moments. Distributor Walt Disney Pictures' exit polling indicated that 54 percent of On Stranger Tides' audience was male and 54 percent was over 25 years old (the age 26-34 group was most represented at 24 percent, followed by 18-25 with 22 percent).

While Pirates was somewhat water-logged, Bridesmaids held its ground. The comedy grabbed $20.9 million, and its 20 percent drop was smaller than any recent comparable comedy at the same point, including The 40-Year-Old Virgin and The Hangover. With a $59.3 million tally in ten days, Bridesmaids has already surpassed the entire run of Bride Wars and has grossed nearly as much as Baby Mama's final haul, and, in terms of estimated attendance, it's on par with 40-Year-Old Virgin through the same point.

What little faith was left in Priest evaporated. The action horror movie bled 68 percent to $4.75 million for an anemic $23.8 million total in ten days. Its fall was steeper than Daybreakers' and most comparable titles. It barely made more than Rio in its sixth weekend ($4.69 million for a $131.7 million tally in 38 days).

Meanwhile, opening at just six locations, Woody Allen's Midnight in Paris took in $599,003, boasting the top per-location average of the year so far. That more than tripled the debut of Allen's last movie, You Will Meet a Tall Dark Stranger (also at six locations), and marked his most impressive limited launch in decades.

• Forecast: 'Pirates' Still Has Life Left in It

• 'Thor' Holds on to Throne, 'Bridesmaids' a Strong Second

• All Time May Opening Weekends