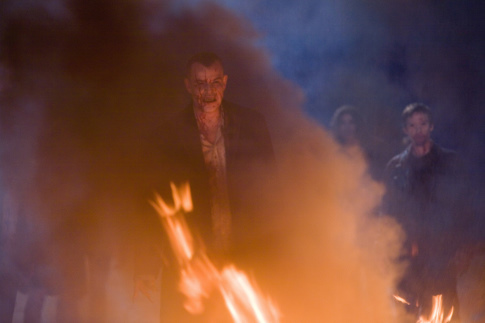 '30 Days of Night' Leads Lifeless Crowd
October 22, 2007 16:23 PDT - By Brandon Gray - Box Office News
The box office fell under 30 Days of Night, literally and figuratively. While the horror movie was the sole title to show bite among a record number of new nationwide releases, darkness has prevailed this Fall with a mostly dour, lifeless lot of dramas and thrillers leading to five down weekends in a row. Quantity in the form of the weekend's eight wide launches wasn't the cure, and holdovers Tyler Perry's Why Did I Get Married and The Game Plan, the only two pictures offering some sunshine, were unfazed by the onslaught.

Topping the weekend, 30 Days of Night drew $16 million on approximately 3,100 screens at 2,855 theaters, which was mid-range among vampire thrillers and about the same as From Dusk Till Dawn in terms of attendance. The $30 million horror stood out as the first new genre picture in a month, since Resident Evil: Extinction, and offered a sufficiently scary survival premise in its marketing to garner its moderately successful debut.

Why Did I Get Married held well for a Tyler Perry picture, making $12.2 million for $39 million in ten days. Its 43 percent drop was better than the 50 percent or greater ones of Perry's previous movies. The Game Plan again had the best hold among wide releases, down 26 percent to $8.2 million for $69.2 million in 24 days.

Falsely claiming to be a spoof of the "greatest sports movies ever" when it was merely goofing on recent movies, The Comebacks fumbled with a soft $5.6 million at 2,812 venues. This latest scatological imitation of other movies' scenes from 20th Century Fox opened to a fraction of the business of their previous ones, Epic Movie and Date Movie. Unlike the subjects of those spoofs, the sports comedy is already a popular sub-genre that doesn't take itself seriously, making Comebacks redundant.

Two dramatic thrillers concerning missing people, Gone Baby Gone and Rendition, were found by few. Gone fared a little better with a meek $5.5 million at 1,713 sites, while the higher profile Rendition coerced a bleak $4.1 million at 2,250 venues. Another well publicized drama, Things We Lost in the Fire, began with a paltry $1.6 million at 1,142 theaters.

Adventure drama Into the Wild expanded to 658 locations and logged a modest $2.1 million, raising its total to $6.5 million, while two independent releases aimed at family audiences with fantastical tales, Sarah Landon and the Paranormal Hour and The Ten Commandments, had two of the worst national debuts of all time.

In limited release, Disney reissued Tim Burton's The Nightmare Before Christmas in 3-D at 564 theaters to more impressive numbers than the glut of new movies. The animated spectacle, originally released 14 years ago, grossed $5.3 million. Disney is making Nightmare into an annual tradition as the studio reissued the picture to strong business last October and has scheduled another reissue for Oct. 24 of next year.

• The Most Crowded Weekends

NOTE: This report was originally written on Sunday, Oct. 21 and was revised on Monday, Oct. 22 with actual grosses.