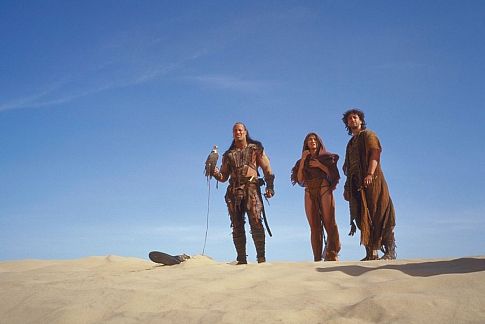 '10,000 B.C.' Dominates Weak Period
March 10, 2008 14:58 PDT - By Brandon Gray - Box Office News
A big budget, prehistoric adventure and a Disney family comedy did not rejuvenate the fossilized box office. After this year's mammoth first month and a half, business has recently slowed, and this weekend was the least attended early March frame since 2001.

Hunting for moviegoers on approximately 5,100 screens at 3,410 locations, 10,000 B.C. gathered $35.9 million. It was a solid start for an ancient action picture and for this time of year, though the $100 million plus production wasn't quite as muscular as The Scorpion King among similar movies. According to distributor Warner Bros.' exit polling, 61 percent of the audience was male and 50 percent was under 25 years old.

10,000 B.C.'s marketing aped the strategy behind Warner Bros.' successful launch of 300 last year, yielding only half the business. 10,000 B.C. was sold as a computer-enhanced spectacle, harkening 300 and other fantasies with primeval beasts and grunting warriors, and its poster copied the thrust of 300's with a cliff's edge fight scene. The campaigns differed on two major points: a storyline and characters were pumped up for 300, neither of which was found in 10,000 B.C.'s ads.

College Road Trip stalled with $13.6 million on around 3,100 screens at 2,706 theaters, which was on the low end for a fish-out-of-water father comedy with a smaller debut than Are We Done Yet? College also flunked by recent Disney standards, trailing by a wide margin the starts of such movies as The Game Plan, The Pacifier and Wild Hogs, another road trip comedy from last March that also featured Martin Lawrence. By focusing on random slapstick antics in its marketing, College came too close to Lawrence's Welcome Home Roscoe Jenkins, which opened last month.

Also debuting, The Bank Job lifted $5.9 million at 1,603 sites, which was soft for a heist picture. Period comedy Miss Pettigrew Lives for a Day was modest with $2.5 million at 535 venues.

Indicative of the box office downturn, holdovers wilted in the face of 10,000 B.C.. Last weekend's top grosser, Semi-Pro, tumbled 62 percent to $5.8 million for $24.7 million in ten days. Holding much better though not well, Vantage Point pulled ahead, down 43 percent to $7.4 million for $51.5 million in 17 days. The Spiderwick Chronicles faded 46 percent, its worst drop yet and steeper than Bridge to Terabithia at the same point, while The Other Boleyn Girl lost 51 percent.

True to the meager impact of the Academy Awards and the fleeting moment in the sun they cast, major Oscar movies dissipated as well. Best Picture winner No Country for Old Men collapsed 62 percent to $1.5 million, though the crime drama has collected a sturdy $72.6 million. There Will Be Blood leaked 58 percent for a less prosperous $38.7 million tally, and the calendar year's highest grosser, Juno, took its hardest hit yet, off 40 percent.