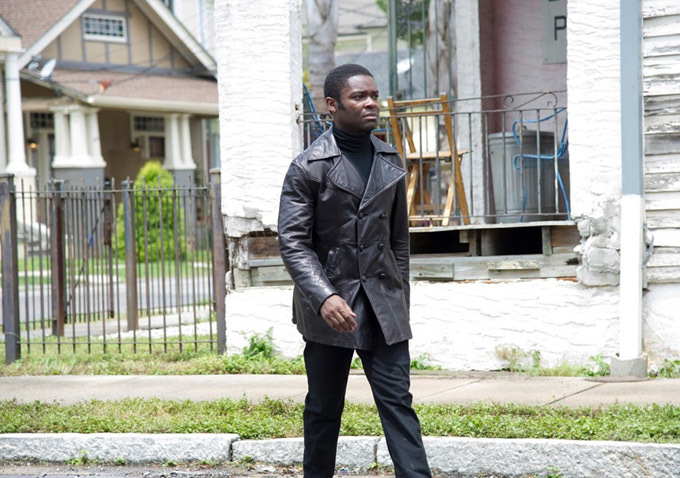 Overall, the Top 12 earned $90 million. That's up nine percent from the same weekend last year, when The Expendables 2 led with a weak $13.4 million.

With good reviews and strong word-of-mouth, The Butler fell 33 percent to $16.5 million. In comparison, The Help dropped 23 percent at the same point in its run two years ago, while 42 dipped 36 percent in its second weekend in April. Through 10 days in theaters, The Butler has earned $51.8 million.

Late Summer comedy hit We're the Millers eased 27 percent to $13.05 million, which allowed the movie to rank second for the third-straight weekend. It's now earned $91.3 million, and it will pass $100 million next weekend. Unless something drastic happens—like One Direction: This is Us winds up being a massive hit—We're the Millers will be the highest-grossing August 2013 release.

Among the newcomers, The Mortal Instruments: City of Bones had the top debut with $9.34 million. Compared to 2013's other Twilight wannabes, that's above Beautiful Creatures ($7.6 million) but a bit lower than The Host ($10.6 million). The movie did burn off some demand with a Wednesday debut, though, and through five days it has earned $14.1 million.

The movie's audience was 68 percent female and 46 percent under the age of 21. They gave it a "B+" CinemaScore, which doesn't really give a good indication of what kind of word-of-mouth it will receive. Regardless, young adult adaptations tend to be very front-loaded, and there's no reason to think that won't be the case here as well.

In fourth place, Edgar Wright's The World's End opened to $8.8 million from 1,549 locations. That's the highest start among Wright's "Cornetto Trilogy" of movies, though Hot Fuzz and Shaun of the Dead each opened in fewer than 1,000 theaters. The audience was 58 percent male and 54 percent under 30 years old, and they gave it a fine "B+" CinemaScore. Ultimately, The World's End should earn more than Hot Fuzz ($23.6 million), though not by too much.

Planes rounded out the Top Five with $8.6 million, which is off 36 percent from last weekend. To date, the DisneyToon animated movie has earned $59.6 million. Meanwhile, Elysium fell 49 percent to $6.9 million for a new total of $68.9 million.

Ahead of the weekend, many box office forecasters—including this one—predicted You're Next was going to be in the running for first place. That proved to be way off base: the low-budget horror movie opened to just $7.02 million this weekend, which was only good for seventh place. It's also the lowest nationwide opening for a horror movie yet in 2013 behind early year bombs Dark Skies ($8.2 million) and The Last Exorcism Part II ($7.7 million). The movie received a weak "B-" CinemaScore, which suggests it will have a fairly standard horror movie drop. Ultimately, it could have trouble cracking $20 million by the end of its run.

All three new nationwide releases were niche products that failed to connect with general audiences. In each case, the marketing was preaching to the choir, and the choir wasn't all that big: Mortal Instruments targeted fans of the book series, The World's End went after Edgar Wright aficionados, and You're Next marketed to indie horror buffs. As a result, none of these movies were able to find mainstream success on opening weekend.

It is important to note, though, that the bar for success isn't the same across the board here. The Mortal Instruments was much more expensive than the other two movies, and the goal was to kick off a series of movies, so this looks to be the biggest loser this weekend. The World's End and You're Next were more modest releases, and are comparatively in better shape.

Woody Allen's Blue Jasmine expanded nationwide this weekend and earned a decent $3.97 million from 1,283 locations. In comparison, Midnight in Paris never reached that many theaters, but still had three weekends in which it earned more than $4.3 million. To date, Blue Jasmine has grossed $14.8 million, and should ultimately top Vicky Cristina Barcelona and Match Point ($23.2 million each).

Jurassic Park 3D expanded in to China this week and earned an excellent $28.8 million through its first six days. That's less than half of Titanic 3D's $67 million debut, but is still a strong figure in its own right. To date, Jurassic Park 3D has earned $44.5 million overseas, which brings its worldwide total to $89.9 million. Adding in the $914 million the movie grossed in its original 1993 run makes Jurassic Park the 17th movie ever to earn over $1 billion worldwide.

Elysium added $20 million this weekend, which includes a solid $4.78 million start in the U.K. To date, the Matt Damon sci-fi flick has taken in $70 million overseas.

Monsters University has quietly become one of Pixar's highest-grossing movies ever. The animated prequel added $19.6 million overseas this weekend, most of which came from a $13 million start in China and a $4.6 million debut in Italy. To date, it has earned $424.8 million overseas, which ranks fourth all-time for the animation studio. Worldwide, it has grossed $686.6 million—fourth all-time for Pixar—and it will pass $700 million by next weekend.

Percy Jackson: Sea of Monsters earned $18.2 million this weekend for an early total of $62.1 million. Its only major opening came in Russia, where it took in a solid $4.9 million.

Horror hit The Conjuring had its best foreign weekend yet with $17.7 million. It scored the highest opening ever for a horror movie in Mexico ($4.8 million), and was also strong in France ($2.4 million) and Italy ($1.9 million). To date, the movie has earned $88.4 million overseas, and it still has Brazil, South Korea and Japan on the way.

Now You See Me continued its surprising run with a great $5.8 million debut in South Korea. Overall, it earned $12.5 million this weekend for a fantastic $176.5 million total.

Despicable Me 2 added $10.9 million from 51 markets this weekend, which brings its foreign total to $455.1 million. Add in its domestic haul and Despicable Me 2 becomes just the seventh animated movie to earn over $800 million worldwide. With Italy, Japan and South Korea still on the way, there's a chance that the movie ultimately closes with over $900 million.

Finally, The Wolverine has now earned over $225 million overseas, which makes it the highest-grossing X-Men movie yet.

• 'You're Next' Targets Top Spot on Quiet August Weekend