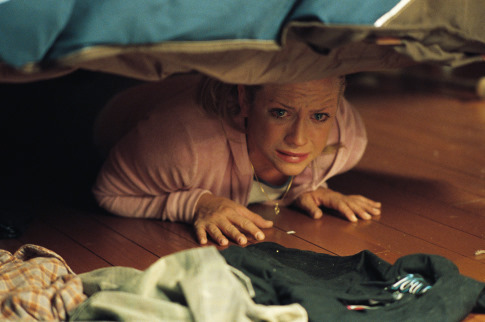 'Prom Night' Tears Into Top Spot
April 15, 2008 13:12 PDT - By Brandon Gray - Box Office News
With flagging holdovers and only one above average launch, overall business was down sharply again. The tally for 2008 now lags behind last year at the same time.

Prom Night nabbed $20.8 million on approximately 3,300 screens at 2,700 venues. The $20 million horror remake's opening was in the upper tier of its genre, though it sold fewer tickets initially than another remake, When a Stranger Calls, as well as the No. 1 picture of the same weekend last year, Disturbia. It succeeded where other remakes like Black Christmas and The Hitcher failed with a theme relatable to its target audience, mostly young females, and eye-catching promotional materials. The original Prom Night grossed around $15 million in its day, the equivalent of nearly $40 million today, adjusted for ticket price inflation. The remake is poised to exceed that total by the end of its run.

Street Kings collected $12.5 million on around 3,000 screens at 2,467 sites, which was middle of the pack among dirty cop dramas and comparable to 16 Blocks. The picture was sold as a rap-infused, ensemble crime thriller, generically posturing instead of standing out with a plot. Also opening, Smart People attracted a meager $4.1 million at 1,106 locations.

The leader of the past two weeks, 21, drew a solid $10.5 million, cooling 32 percent for $61.7 million in 17 days. On the other hand, Leatherheads tumbled over 50 percent in its second weekend to $6.3 million. It was a terrible hit for the period sports comedy that was counting on its adult audience, which typically doesn't rush to theaters on the first weekend, to carry it after a disappointing start. Its total is a soft $21.9 million in ten days.

Fox family titles and the market's two widest releases, Nim's Island and Dr. Seuss' Horton Hears a Who!, held decently, off 31 and 35 percent, respectively. Nim's at a modest $25.4 million in ten days, while Horton remains the year's highest earner with $139.5 million in 31 days.