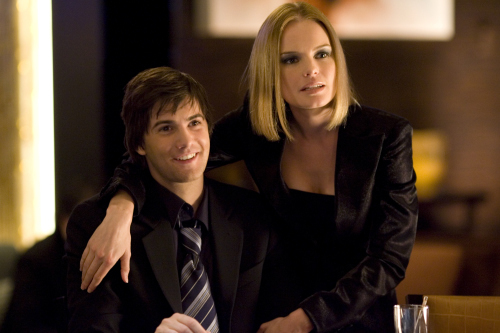 '21' Scores
March 30, 2008 19:12 PDT - By Brandon Gray - Box Office News
Four new movies gambled on nationwide releases and only one came up a winner during another soft time at the box office. Blackjack drama 21 chipped in a good opening gross, but overall weekend attendance was the lowest an end of March frame has seen since 1999.

21 numbered an estimated $23.7 million on approximately 3,300 screens at 2,648 theaters, which was on the high end for a heist or hustler movie. Goal-directed action towards universally desired riches (and getting away with it) is a big part of the attraction for this type of picture, and 21's marketing campaign clearly and slickly conveyed the premise of college math whizzes taking Las Vegas for a ride. Ads heralded that the movie was "inspired by a true story" and there was greater youth interest than the genre norm given the age and predicament of the main characters, leading to similar appeal as Catch Me If You Can. Distributor Sony reported that 21 had a broad turnout among key age and gender demographics and that 53 percent of the audience was male and 53 percent was under 25 years old.

Superhero Movie crashed with an estimated $9.5 million on around 3,100 screens at 2,960 theaters, or about half of fellow spoof Meet the Spartans' debut two months ago. Spartans beat Superhero to the punch with gags about Spider-Man 3, Ghost Rider and breakdancing, and it had a fresher primary subject in 300, whereas Superhero was mainly working off the six-year-old Spider-Man. What's more, superhero movies aren't as ripe for parody as other kinds as they often mock themselves, and there have been outright superhero comedies before, like Mystery Men and My Super Ex-Girlfriend, and they almost invariably fail.

The latest casualty among dramas themed around the war in Iraq and Afghanistan, Stop-Loss, enlisted a mere estimated $4.5 million at 1,291 sites, even with a youth-oriented promotion as an MTV Films release that prior titles lacked. The picture, concerning soldiers returning home only to become victims of a backdoor military draft, was a tough sell, though the ads tackled the issue head on despite the public's apathy. Like Rendition, The Kingdom and other flops, though, the focus was more on a tertiary issue rather than the war itself, and, though many viewers may agree with the points about an unpopular war, the marketing did not present a positive value, like a strong story or character, to compel them to see the picture in theaters.

Surpassing Juno as the highest grossing picture of the calendar year, Dr. Seuss' Horton Hears a Who rounded up an estimated $17.4 million in its third weekend for a $117.3 million total. The computer-animated comedy's 29 percent drop was smaller than the Ice Age movies at the same point. Another comedy, Run Fat Boy Run, limped in with an estimated $2.4 million opening at 1,133 locations.

Tyler Perry saw his steepest second weekend stumble yet with Tyler Perry's Meet the Browns. The comedy-drama fell 61 percent to an estimated $7.8 million for $32.8 million in ten days. The other second weekend releases, Drillbit Taylor and Shutter, retained more business but were still marginal with less than $6 million apiece. Disney comedy College Road Trip had the smallest slip among nationwide releases, off 25 percent, but its tally stands at a disappointing $38.4 million in 24 days. Meanwhile, The Bank Job had a normal decline, down 33 percent, after two weekends of stellar holds. The heist picture's total is $24.1 million in 24 days.